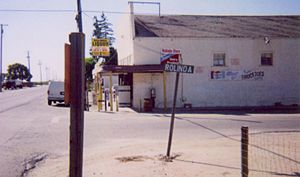 Rolinda Store, (a.k.a. Rolinda Liquor, South side of it was Rolinda Mercantile previously owned by Amanda Duncan closed in 1963 with sn Ice House to supply the area, Also was a car dealership west of it that still stands that sold Whippet and Essick branded vehicles..across the street was a two story hotel that burned down in the 40's ...also two barn building one was a blacksmith shop but both fell in 1968, Rolinda Auto Supply was across from Hotel that was remodeled in 1948 with Victor Bringetto's help and he purchased business in 1953 & updated and expanded 1/4 east in 1970 with an 8000 sq ft facility, also was Rolinda Variety store and Boones Body Shop, Barney Huninhton Pump, Guist Farm Equipment, Rolinda Bar and the Grest Rolinda Train robbery that occurred in summer of 1892!,..all existing are landmark of the community along SR180. Which is concrete under over two feet of asphalt now upgraded from 60' easement to 160' easement

Land surrounding the small community is mostly irrigated, la Thompson seedless grapevines used for Raisin and agricultural land. Row crops include feed crops such as alfalfa. It is common to see cattle egrets patrolling the fields for insect life. Raptors including red-shouldered hawks are also widely visible during daylight hours.

A landmark south of town is the Houghton-Kearney Elementary School, 8905 W. Kearney Blvd., o preceded by the Houghton School at 9128 W Whitesbridge Road where the old bus barn still stands closed in 1953 operated by the K-12 Central Unified School District. The facility is located at 36°43′39″N 119°57′01″W﻿ / ﻿36.72750°N 119.95028°W﻿ / 36.72750; -119.95028. In addition the preceding Kearney School was on Kearney Ave (now renamed Chateau Fresno Have...names were switched at one point in time?) Cross street Annadale that old timers tell me where the new Kearney Mansion was to be built about 4 times the size of the existing French style servants house still known as mansion and there is no records found that verify what I was told but Kearney school was there! A post office operated at Rolinda from 1895 to 1902.

All content from Kiddle encyclopedia articles (including the article images and facts) can be freely used under Attribution-ShareAlike license, unless stated otherwise. Cite this article:
Rolinda, California Facts for Kids. Kiddle Encyclopedia.