Rosedale is a valley located almost in the centre of the North York Moors national park in North Yorkshire, England. The nearest town is Kirkbymoorside located some 7 miles (11 km) to the south. Rosedale is surrounded by moorland. To the north-west sits Blakey Ridge at over 1,300 feet (400 m) above sea level. At Dale Head is the source of the River Seven which flows down the valley to join the River Rye at Little Habton near Malton. At its southern end, Rosedale is squeezed between Spaunton Moor and Hartoft Rigg, where the river flows out through Forestry Commission woodland before passing the village of Cropton to reach the plains of the Vale of Pickering. 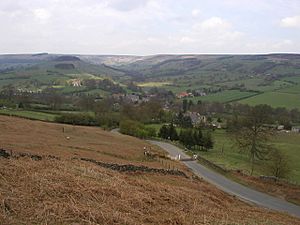 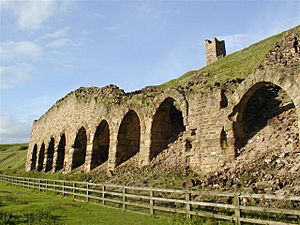 Ruins of calcining kilns near Rosedale East Ironstone Mine

Rosedale has only a small number of people involved in farming. The majority of homes are bought as second homes and as such the permanent local population has been significantly reduced. In the late 19th century, the valley quickly became a major centre for iron ore extraction. This gave rise to the modern village of Rosedale Abbey, built around the site of a former Cistercian Priory and now the only settlement in the valley. Mining took place from 1857 to 1928. The ore was pre-processed by calcination for which special kilns were built. The mines were served by the freight-only Rosedale Railway from Battersby which closed in 1929 after the last of the calcine dust extracted from the kiln waste had been sold.

Rosedale Chimney Bank, one of the steepest roads in the United Kingdom, provides a popular entrance point into the valley. A row of disused kilns and a former Royal Observer Corps Underground Monitoring Post are both situated yards from its summit. In the adjacent Farndale Valley wild daffodils bloom around Easter time. In mid-August the Rosedale Show is held at Rosedale Abbey – it attracts some 5,000 people from all parts of Britain. The show dates back to 1871 and is one of the oldest in North Yorkshire.

The Frank Elgee memorial was erected in 1953 at Blakey Ridge on The North York Moors, overlooking Loose Howe at Rosedale Head.

All content from Kiddle encyclopedia articles (including the article images and facts) can be freely used under Attribution-ShareAlike license, unless stated otherwise. Cite this article:
Rosedale, North Yorkshire Facts for Kids. Kiddle Encyclopedia.