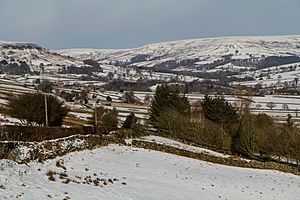 Farndale is a valley and civil parish in Ryedale district, North Yorkshire, England, which is known for the daffodils which flower each spring along a 7-mile (11 km) stretch of the River Dove. The valley is in the North York Moors National Park, some 11 miles (18 km) north of Kirkbymoorside, the nearest town. Pickering is some 17 miles (27 km) to the south-east and Helmsley 17 miles (27 km) to the south-west.

The combined population of the civil parishes of Farndale East and Farndale West was 207 in 2011, and was estimated to have dropped to 180 by 2015. The two parishes were combined in 2018 to form Farndale parish.

Farndale is an isolated, scattered agricultural community with traditional Yorkshire dry stone walls. The valley is popular with walkers due to its famous wild daffodils, which can be seen around Easter time all along the banks of the River Dove. To protect the daffodils the majority of Farndale north of Lowna was created a Local Nature Reserve in 1955.

Farndale is home to two hamlets; Church Houses at the top of the valley and Low Mill further down. Low Mill is a tourist honeypot during daffodil season as this is where the famous daffodil walk begins. The other end of the daffodil walk is at High Mill a cluster of houses a short distance down a lane from Church Houses.

The annual Farndale Agricultural Show which is held on the Summer Bank Holiday Monday in late August is a popular local event. The 100th Show was held in 2006.

Sources disagree on the origin of the name Farndale, although it is a combination of two parts "Farn" and "Dale".

There a four possible origins for "Farn" all of which do describe the dale. It may be derived from the Celtic "Faren" meaning beautiful; alternatively it could be derived from the Scandinavian "FæN" meaning sheep or possibly from Old English "Fearn" meaning fern or ferny place or from the Gaelic "Feàrna" which means alder tree of which there are many in Farndale.

While Dale probably means Valley either derived from Scandinavion "Dalr" or Anglian "Dæl" although it could be derived from the Gaelic "Dail" meaning level field by a river.

The name of the River Dove which flows through Farndale is almost definitely from either the Old British "Dubo" meaning Black or from the Gaelic "Dubh" also meaning black, hence Black (or Dark) River.

Farndale is a valley within the North York Moors, it is surrounded by some of the wildest moorland in England. The dale is sandwiched between Bransdale to the west, Rosedale to the east and Westerdale to the north. To the north-east sits Blakey Ridge at over 1,312 feet (400 m) above sea level, and to the north-west, Cockayne Ridge reaching up to 1,490 feet (454 m) above sea level is one of the highest points of the North York Moors. The southern boundary of the Farndale Parishes are along Harland Beck and Shortsha Beck (across Lowna Lund), although the Gillamoor to Hutton-le-Hole road is considered as the boundary for all other purposes, south of this the dale continues but changes its name to Douthwaitedale, though the Tabular Hills until it reaches Keldhome then Kirkby Mills just east of Kirkbymoorside.

The River Dove rises on Westerdale Moor North of Farndale, then flows through Farndale south-east past to Church Houses. Here it turns south and continues meandering past Low Mill to Lowna. At Gillamoor it heads south-east again past Hutton-le-Hole before returning southwards past Ravenswick and to the east of Kirkbymoorside. It continues past Keldholme and Kikrby Mills to Great Edstone. From there it flows south-south-east to where it joins the River Rye in the Vale of Pickering near the village of Salton. Several tributaries meet the Dove through Farndale two of these make the valley is almost 'cactus' shaped, with a long central valley following the River Dove, and two side branches to make the arms - Blakey Gill near Church Houses and West Gill near Low Mill. 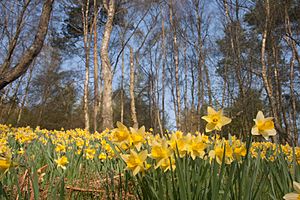 The Farndale Local Nature Reserve constitutes the majority of Farndale, which is a dale within the North York Moors National Park. It was created in 1955 to protect the wild daffodils (narcissus pseudonarcissus), for which the dale is famed. The Local Nature reserve comprises the larger part of the Farndale Site of Special Scientific Interest which comprises 390 acres (157 ha).

Over 40,000 people visit the dale in the springtime to walk along the River Dove and see the daffodils. The variety of daffodil that grows wild in the valley, has shorter stems than the cultivated variety and are believed to have been planted by monks in medieval times. The daffodils are also known as Lent Lilies in Farndale and they usually appear around Lent.

Around the north of Farndale, between Bloworth Crossing and Blakey is the track bed of the old Rosedale Ironstone Railway (Rosedale Branch) which forms part of three Long Distance Footpaths these being Wainwright's Coast to Coast Walk, The Lyke Wake Walk and the Esk Valley Walk.

In April 2018 a joint Farndale Parish Council was formed under a grouping order and it now represents the interests of all residents in Farndale.

The second tier of Local Government is Ryedale District Council and the third tier North Yorkshire County Council, historically being part of the North Riding of Yorkshire.

Farndale is part of the Thirsk and Malton UK Parliament constituency and the Yorkshire and Humber European Parliamentary constituency.

All content from Kiddle encyclopedia articles (including the article images and facts) can be freely used under Attribution-ShareAlike license, unless stated otherwise. Cite this article:
Farndale Facts for Kids. Kiddle Encyclopedia.