Rosemary Hall was an independent girls school at Ridgeway and Zaccheus Mead Lane in Greenwich, Connecticut. It was later merged into Choate Rosemary Hall and moved to the Choate boys' school campus in Wallingford, Connecticut.

The Greenwich campus of Rosemary Hall was opened in 1900. The oldest surviving building was built in 1909. The Greenwich campus was listed on the National Register of Historic Places in 1998 for its architectural significance. The listing includes 16 contributing buildings and one other contributing structure. The historic site's listing area is 18 acres (7.3 ha). The Carmel Academy (formerly the Westchester Fairfield Hebrew Academy) now owns the property, and classes of that school and The Japanese School of New York are held in that campus.

See also: Choate Rosemary Hall for officers since the 1971 merger with Choate.

See Choate Rosemary Hall for the history since the 1971 merger with Choate.

Rosemary Hall was founded in 1890 by Mary Atwater Choate at Rosemary Farm in Wallingford, her girlhood home and the summer residence of Mary and her husband, William Gardner Choate. Mary, an alumna of Miss Porter's School, was the great-granddaughter of Caleb Atwater (1741–1832), a Connecticut merchant magnate who supplied the American forces during the Revolutionary War. In 1775 General George Washington visited the Atwater store in Wallingford en route to assuming command of the Continental Army. On that occasion, Washington took tea with judge Oliver Stanley at the "Red House," now Squire Stanley House on the Choate Rosemary Hall campus.

In 1878 Mary Atwater Choate had co-founded a vocational organization for Civil War widows, the New York Exchange for Women's Work, prototype of many such exchanges across the country (it survived until 2003). In 1889 Mary planned a new institution on the same principle of female self-sufficiency and she advertised in The New York Times for a headmistress to run a school that would train girls in the "domestic arts." The advertisement was answered by Caroline Ruutz-Rees, a 25-year-old Briton teaching in New Jersey.

On October 3, 1890, the New Haven Morning News reported: "The opening of Rosemary Hall took place at Wallingford yesterday ... at the beautiful Rosemary Farms, which have been the property of Mrs. Choate's family for five generations. The school occupied a house belonging to Mrs. Choate, standing near the old Atwater homestead, which the members of the school will have the privilege of visiting as often as they like. ... Rev. Edward Everett Hale addressed the school girls in his inimitable way, at once attractive and helpful. 'Never forget,' said he, 'that it is a great art to do what you do well. If you limp, limp well, and if you dance, dance well'."

This original school building, "old" Atwater House (built 1758), was at the northwest corner of Christian and Elm streets, where "new" Atwater House now stands. The eight arriving girls lived on the second floor, the headmistress's residence and classrooms occupied the ground floor, and the dining room was in the basement. More space was soon required and neighboring houses were rented from the Choates. The "old Atwater homestead" (built 1774, now known as Homestead), stands at the center of the present day Choate Rosemary Hall campus, on the northeast corner of Christian and Elm.

Caroline Ruutz-Rees (1865–1954), headmistress until 1938, was a figure of extraordinary personality and influence, a militant feminist and suffragist of national prominence. On the Wallingford golf course she wore bloomers, which shocked the locals, and on buggy rides to Wallingford station she carried a pistol. Her motto was "No rot." She held a Lady Literate in Arts from the University of St Andrews and would eventually earn a doctorate at Columbia. Ruutz-Rees (pronounced "Roots-Reese") quickly changed Rosemary Hall's mission from "domestic arts" to that of a contemporary boys school. Her personal curriculum for the next four decades had three core components: student self-government, contact sports, and a brutal workload of academics.

Ruutz-Rees taught the classical languages, history, and French. In 1897 she was the first headmistress of an American girls' school to prescribe uniform dress, and over time the Rosemarian uniform became increasingly elaborate, with cape, star-shaped berets, and much seasonal and occasional variety. Equally elaborate was Rosemarian ritual and tradition, most of it invented by Ruutz-Rees. Her faculty followed the British practice of wearing academic robes in class and addressing students by their last names. Ruutz-Rees herself always wore azure silk dresses and a necklace of amber beads.

In 1896 the Choate School was founded in Wallingford by Mary Choate and her husband William. He was U.S. District Judge for the Southern Circuit of New York from 1878 to 1881, and afterward a partner of Shipman, Barlow, Laroque, and Choate in New York City. There was no formal relationship between the Choates' new boys school and their other foundation, Rosemary Hall, a hundred yards to the east on Christian Street in Wallingford, but there were coeducational audiences for plays and recitals and Mary Choate hosted dances at the Homestead, an Atwater family residence since 1774.

The official history of Choate Rosemary Hall, written by Tom Generous, says that the rift between Caroline Ruutz-Rees and Mary Choate, proponents of two very different sorts of feminism, was public knowledge as early as 1896, in which year headmistress and founder did not share the lectern at Prize Day and local newspapers published "denials" of a rumor that Ruutz-Rees would leave the school. But by 1900 the headmistress and her educational style had acquired influential champions among the students' parents and two of them, residents of Greenwich, Connecticut, a wealthy enclave twenty-five miles from midtown Manhattan, joined forces to effect the removal of the school to their town.

Shipping magnate Nathaniel Witherell donated 5 acres (20,000 m2) of land in the Rock Ridge section of Greenwich. Julian Curtiss gathered a group of investors and established a joint stock corporation funded through the sale of six-percent bonds. Ruutz-Rees was the chief shareholder. The Greenwich residence of Rosemary Hall began in fall term 1900, when 57 girl students moved into the Main Building, known as "The School," a U-shaped shingled house on Zaccheus Mead Lane. Other facilities on the property were a wood-frame building that would be the gym for many years, a tennis court, and a running track. In the next two decades the campus would build or acquire other "cottages" and lay out an Italian garden, the gift in 1912 of Janet Ruutz-Rees, mother of the headmistress.

The heart of the campus was St. Bede's Chapel, built with $15,000 collected at bake sales, teas, and benefits, and from every constituency of the school. Construction began in 1906 and consecration was performed October 18, 1909, by the Episcopal bishop of Connecticut, Chauncey Bunce Brewster. St. Bede's was Middle English Gothic, with granite walls, unnailed slate roof, hand-hewn timbers, Welsh red tile floor, and a 16-foot (4.9 m) altar window of handmade English glass, designed by Christopher Whall. According to the November 25, 1909 issue of Leslie's Weekly," it was "begun three years ago by the girls themselves who collected stones and carried them one by one to the spot which the building was to occupy." From 1915 to 1965 the handwritten name of every graduate was painted in gold on the ceiling. On October 17, 2009, the centennial of St. Bede's was celebrated in Greenwich by Rosemarians past and present, with the Whimawehs singing traditional RH songs. 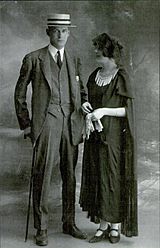 All content from Kiddle encyclopedia articles (including the article images and facts) can be freely used under Attribution-ShareAlike license, unless stated otherwise. Cite this article:
Rosemary Hall (Greenwich, Connecticut) Facts for Kids. Kiddle Encyclopedia.