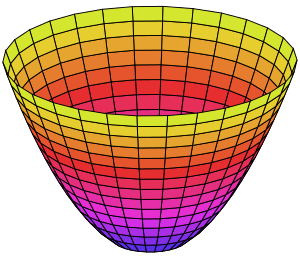 Axially symmetrical paraboloid. The inside surface is concave

A rotating furnace is a device for making solid objects which have concave surfaces that are segments of axially symmetrical paraboloids. Usually, the objects are made of glass. The furnace makes use of the fact, which was known already to Newton, that the centrifugal-force-induced shape of the top surface of a spinning liquid is a concave paraboloid, identical to the shape of a reflecting telescope's primary focusing mirror.

Paraboloids can be used in various ways, including (after being silvered) as primary mirrors in reflecting telescopes and solar cookers. 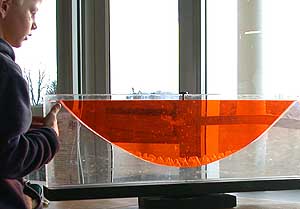 Parabolic shape formed by a liquid surface under rotation. Two liquids of different densities completely fill a narrow space between two sheets of plexiglass. The gap between the sheets is closed at the bottom, sides and top. The whole assembly is rotating around a vertical axis passing through the centre

The furnace includes a mechanism that rotates an open-topped container at constant speed around a vertical axis. A quantity of glass sufficient to make the mirror is placed in the container, heated until it is completely molten, and then allowed to cool while continuing to rotate until it has completely solidified. When the rotation is stopped, the glass is solid, so the paraboloidal shape of its top surface is preserved. This process is called spin casting.

The same process can be used to make a lens with a concave paraboloidal surface. The other surface is shaped by the container that holds the molten glass acting as a mould. Lenses made this way are sometimes used as objectives in refracting telescopes.

The axis of rotation becomes the axis of the paraboloid. It is not necessary for this axis to be in the centre of the container of glass, or even for it to pass through the container. By placing the container away from the axis, off-axis paraboloidal segments can be cast. This is done in the making of very large telescopes which have mirrors consisting of several segments.

All content from Kiddle encyclopedia articles (including the article images and facts) can be freely used under Attribution-ShareAlike license, unless stated otherwise. Cite this article:
Rotating furnace Facts for Kids. Kiddle Encyclopedia.