The Royal Canadian Navy Monument is a small memorial park located at Richmond Landing, next to the Ottawa River in Ottawa, Ontario, Canada. It commemorates the men and women who have served or are currently serving in the Royal Canadian Navy. The monument was designed by artist Al McWilliams and architects Joost Bakker and Bruce Haden, and was officially opened by then Prime Minister of Canada, Stephen Harper, on 3 May 2012.

The Royal Canadian Navy Monument was commissioned by the National Capital Commission and Royal Canadian Navy, who jointly launched a design competition in 2009. The competition was won by a team based in Vancouver, British Columbia, comprising artist and sculptor Al McWilliams, and architects Joost Bakker and Bruce Haden. 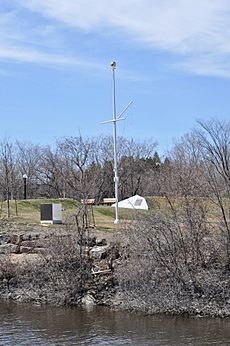 The mast and theatre entrance

The monument consists of a shallow turf Roman theatre, approximately 25 m (82 ft) in diameter, that faces downriver to the east. The open end of the theatre is focused on a large, inclined sail-like feature, five to eight metres in height, that is clad in slightly mottled white marble and is topped by a 1.5 m (5 ft) gilded sphere, somewhat offset. On the western face of the north–south orientated sail the motto "Ready Aye Ready" and its French translation, "Prêt Oui Prêt", are carved in the uppermost corner. The theatre honours of the Royal Canadian Navy are carved into the eastern face. The sail is set into a pavement of pale grey granite, with a fouled anchor symbol inlaid in contrasting black granite. A white mast carrying a yard, gaff and rigging, topped by a small gilded sphere, is situated to the south of the amphitheatre's open area. The monument is approached via an entrance from the landward end of the peninsula, cut through the western side of the theatre bank, that is lined with the same grey granite as surrounds the focal sail.

The design evokes a number of aspects of Canada and its navy, and was intended as "a form and space charged with meaning". Being surrounded on three sides by water, the position of the monument reflects Canada's own geographical position. The colours of the monument – white, black and gold – are those of the Royal Canadian Navy. The sail-like feature carries multiple interpretations, including a sail, a ship's hull, an iceberg or naval attire. The golden spheres used on both the sail and mast represent celestial bodies and the navy's global reach.

All content from Kiddle encyclopedia articles (including the article images and facts) can be freely used under Attribution-ShareAlike license, unless stated otherwise. Cite this article:
Royal Canadian Navy Monument Facts for Kids. Kiddle Encyclopedia.