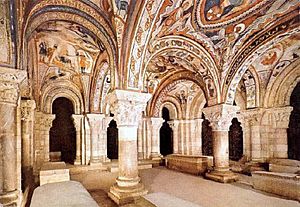 The Royal Panteon of San Isidoro is where the kings and queens of León are buried. It is inside the Basilica of San Isidoro. It is in the Romanesque style of architecture. People were buried there during the Kingdom of León in the Middle Ages.

There are many fresco paintings, carved stone pillars, and other art. The art shows scenes from Roman Catholic religion, for example angels talking to shepherds, the Crucifixion of Jesus, and the Last Supper.

King Ferdinand I and Queen Sancha ordered builders to make the Panteon. There are 11 kings, 12 queens, 10 princes, 9 counts and some other people buried there.

All content from Kiddle encyclopedia articles (including the article images and facts) can be freely used under Attribution-ShareAlike license, unless stated otherwise. Cite this article:
Royal Panteon of San Isidoro Facts for Kids. Kiddle Encyclopedia.