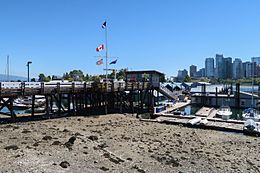 The Royal Vancouver Yacht Club (RVYC) is a yacht club located in Vancouver, British Columbia. Royal Vancouver Yacht Club currently operates two marinas, the one at Jericho Beach in English Bay and another in Coal Harbour. The Jericho site includes a clubhouse, two restaurants, and berths enough for 350 as well as a dinghy dock. In 2017 the award-winning Dock Building was completed, designed by Michael Green Architecture, providing offices for the Harbour Master, instruction and amenity space and workshops to maintain boats, sails, and gear. The Coal Harbour site has approximately 350 berths, some with covered moorage, and is also the location of the Mermaid Inn. The club also has seven offshore stations in BC waters.

In 1970, George A Cran edited 'Annals of the Royal Vancouver Yacht Club, 1903–1970' which was condensed and rewritten from records of G.B. Warren, first historian of the club, and the personal recollections of the members of the History Committee, R.V.Y.C., by Norman Hacking.' The Club Annals provides a history of the RVYC's "founding, granting of the Royal Charter, prominent early yachtsmen, racing contests and trophies, officers of the Club, and a general review of sail and power boat activity for sixty-two years in the waters of Burrard Inlet and English Bay, Vancouver, B.C., and Gulf of Georgia, British Columbia, Canada."

In 1986, M. Watson MacCrostie edited 'Annals of the Royal Vancouver Yacht Club, 1971–1985': an updating of the history of Club's members, boats, events and trophies as they appear (or have been amended) in the Year Books, Seabreezes and Annual Reports of the years 1971–1985. The information was taken and rewritten from the records and pictures in the Archives of the Club

In 2003, as part of the Club's centennial celebrations, James P Delgado wrote 'Racers and rovers: 100 years of the Royal Vancouver Yacht Club.'

The Royal Vancouver Yacht Club has a collection of model yachts. 'My Calliope', for example, designed by naval architect Jack Hargrave was donated to the club on 31 May 2012.

All content from Kiddle encyclopedia articles (including the article images and facts) can be freely used under Attribution-ShareAlike license, unless stated otherwise. Cite this article:
Royal Vancouver Yacht Club Facts for Kids. Kiddle Encyclopedia.