Sterner St. Paul Meek (April 8, 1894 in Chicago, Illinois – June 10, 1972) was an American military chemist, early science fiction author, and children's author. He published much of his work first as Capt. S.P. Meek, then, briefly, as Major S.P. Meek and, after 1933, as Col. S. P. Meek. He also published one story as Sterner St. Paul.

When the United States entered World War I in 1917, Meek joined the military as a chemist and ordnance expert. He served as Chief, Small Arms Ammunition Research, in 1923-1926, and Chief Publications Officer, Ordnance Dept., in 1941-1945. He retired a colonel in 1947, at which point he became a full-time writer. 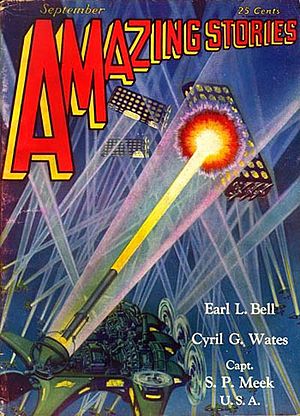 Meek sold his first fiction story, "Taming Poachers", to Field and Stream, where it appeared in September 1928. Between early 1929 and January 1933, he published over 20 science fiction stories and short novels in pulp science fiction magazines like Astounding Science Fiction and Amazing Stories, most of them in his popular Dr. Bird and Operative Carnes series. Meek left the field in early 1933, with only one further science fiction story published in 1939.

Like many early pulp science fiction writers, Meek used fiction to give detailed descriptions of current and projected scientific advances. He utilized many contemporary science fiction tropes, e.g. the notion that atoms were miniaturized solar systems in his stories "Submicroscopic" and "Awlo of Ulm".

Meek quickly became popular with pulp magazine readers and was eagerly sought out by editors. In the first issue of Astounding Science Fiction in 1930, its editor Harry Bates listed Meek among "some of the finest writers of fantasy in the world", alongside Murray Leinster, Ray Cummings and others. However, Meek's stories were crudely executed and the higher standards introduced with the Golden Age of Science Fiction soon made them of strictly historical interest. Science fiction writer and critic Samuel R. Delany later called Meek's writing "unbelievably bad".

After Meek stopped writing science fiction, his disappearance from the industry was a mystery to readers until The Drums of Tapajos was reprinted in 1962. Meek published over twenty children's books between 1932 and 1956, starting with Jerry, the Adventures of an Army Dog, usually about dogs or horses. Many of these books drew on Meek's experiences in the military. 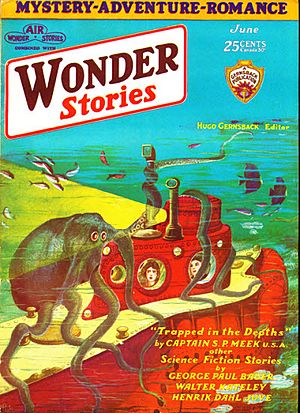 All content from Kiddle encyclopedia articles (including the article images and facts) can be freely used under Attribution-ShareAlike license, unless stated otherwise. Cite this article:
S. P. Meek Facts for Kids. Kiddle Encyclopedia.