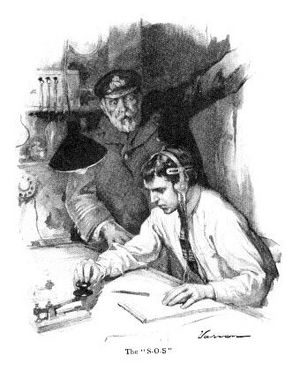 SOS (· · · — — — · · ·) is a Morse code. It is used as distress code, to signal danger. It was introduced by the German government in radio regulations on April 1, 1905. It became the worldwide standard when it was included in the second International Radiotelegraphic Convention, which was signed on November 3, 1906. The convention became effective on July 1, 1908.

From the beginning, the SOS distress signal has actually been a continuous sequence of three-dits/three-dahs/three-dits, all run together without letter spacing. In International Morse Code, three dits form the letter S, and three dahs make the letter O, so "SOS" became an easy way to remember the correct order of the dits and dahs. In modern terminology, SOS is a "procedural signal" or "prosign", and the formal way to write it is with a bar above the letters. It should be written SOS.

In popular usage, SOS became associated with phrases such as "Save Our Souls," "Save our Ship", and others. It is mostly known by "Save Our Ship". However, these phrases were a later development, most likely as a Mnemonic to help remember the correct letters—something known as a backronym. In reality the signal SOS is not an acronym and doesn't stand for anything.

Many songs have been made of the distress signal SOS, such as Message in a Bottle by The Police, "SOS" by ABBA, "SOS" by Rihanna, "S.O.S." by the Jonas Brothers, "Stranger" by Gamma, "S.O.S" by The Suicide Machines, "S.O.S" by Ola Svensson and "SOS" by Avicii.

Before radio communication was developed in the early 1890s, seagoing ships had already adopted many different visual and audio distress signals. They used such things as semaphore flags, signal flares, bells, and foghorns. In the beginning, radio was called wireless telegraphy. It used Morse code, the dit-and-dah system originally developed for landline telegraphy.When radio communication was made available to ships, there was a need for standardized communication. Cooperation was somewhat limited by national differences and rivalries between different radio companies.

The first International Radiotelegraphic Conference was held in Berlin, Germany in 1903. At the time, Captain Quintino Bonomo, an Italian representative, discussed the need for common operating procedures. He also had the suggestion that "ships in distress... should send the signal SSS DDD at intervals of a few minutes", according to "The Wireless Telegraph Conference", in the November 27, 1903, issue of The Electrician. Question on how to do things were beyond the scope of the 1903 Conference. Although Article IV of the Conference's Final Protocol, signed August 13, 1903, said that "Wireless telegraph stations should unless practically impossible, give priority to calls for help received from ships at sea," no standard signal was adopted at the time.

Because there were no international regulations, each ship was left to develop its own practices. For example in 1905 the crew of a sinking lightship off Nantucket transmitted the word "HELP" to call for rescue. Perhaps the first international radio distress call adopted was "CQD" ( — · — ·    — — · —    — · · ). This was announced on January 7, 1904 by "Circular 57" of the Marconi International Marine Communication Company. It became effective for Marconi installations on February 1, 1904. Another suggestion appeared in the 1906 edition of S. S. Robison's "Manual of Wireless Telegraphy for the Use of Naval Electricians," published for use by the United States Navy. This stated that the standard visual flag signals, known as the International Code of Signals, would likely also be adopted for radio use. Therefore, the flag signal "NC" ( — ·     — · — · ), which stood for "In distress; want immediate assistance", would also likely become the radio distress call.

SOS was developed from the general German radio call "SOE", with the 3 dits of a "S" easier to hear in static than the one dit of an "E". The string has no other meaning. It was also selected because it is easy to recognize and can be sent rapidly. Comparing SOS (di-di-di-dah-dah-dah-di-di-dit) with the older CQD (dah-di-dah-dit dah-dah-di-dah dah-di-dit) (— ·—· /—— ·—/—· ·) it is obvious how much simpler the new code is. It would not be mistaken for CQ,either. CQ is the radio code for "calling anyone" used in casual circumstances.

In 1906, the second International Radiotelegraphic Convention was held in Berlin. This convention developed many Service Regulations to be added to the main agreement, which was signed on November 3, 1906, and became effective on July 1, 1908. Article XVI of the regulations adopted Germany's Notzeichen distress signal as the international standard, reading: "Ships in distress shall use the following signal: · · · — — — · · ·  repeated at brief intervals". The first ship to transmit an SOS distress call appears to have been the Cunard liner Slavonia on June 10, 1909, according to "Notable Achievements of Wireless" in the September, 1910 Modern Electrics. However, there was some resistance among the Marconi operators about adopting the new signal, and, as late as the April, 1912 sinking of the RMS Titanic, the ship's Marconi operators intermixed CQD and SOS distress calls. But with the need for consistency for public safety, the use of CQD appears to have generally disappeared after this point.

In both the April 1, 1905 German law, and the 1906 International regulations, the distress signal was specified as a continuous Morse code sequence of three-dits/three-dahs/three-dits, with no mention of any alphabetic equivalents. However, in International Morse three dits make the letter S, and three dahs the letter O, and it soon became common to refer to the distress signal as "SOS." An early report on "The International Radio-Telegraphic Convention" in the January 12, 1907 Electrical World said that "Vessels in distress use the special signal, SOS, repeated at short intervals." (In American Morse code, which was used by many coastal ships in the United States through the first part of the twentieth century, three dahs stood for the numeral "5", so in a few cases the distress signal was informally referred to as "S5S").

In contrast to CQD, which was sent as three separate letters with spaces between each letter, the SOS distress call has always been transmitted as a continuous sequence of dits-and-dahs, and not as individual letters. There was no problem as long as operators were aware that "SOS" was technically just a convenient way for remembering the proper sequence of the distress signal's total of nine dits and dahs. In later years, the number of special Morse symbols increased. In order to designate the proper sequence of dits-and-dahs for a long special symbol, the standard practice is to list alphabetic characters which contain the same dits-and-dahs in the same order, with a bar atop the character sequence to indicate that there should not be any internal spaces in the transmission. Thus, under the modern notation, the distress signal becomes SOS. (In International Morse, VTB, IJS and SMB, among others, would also correctly translate into the · · · — — — · · ·  distress call sequence, but traditionally only SOS is used).

SOS has also sometimes been used as a visual distress signal, consisting of three-short/three-long/three-short light flashes, or with "SOS" spelled out in individual letters, for example, stamped in a snowbank or formed out of logs on a beach. The fact that SOS can be read right side up as well as upside down became important for visual recognition if viewed from above.

Additional warning and distress signals were introduced after SOS. On January 20, 1914, the London International Convention on Safety of Life at Sea adopted the Morse code signal TTT ( —  —  —), three letter T's (—) spaced correctly as three letters so as not to be confused with the letter O (- - -), as the "Safety Signal," used for messages to ships "involving safety of navigation and being of an urgent character." When radio transmitters that could send audio were developed, there was a need for a spoken distress phrase, and "Mayday" was adopted by the 1927 International Radio Convention as the equivalent of SOS. For TTT the equivalent audio signals are "Pan-pan" for urgency and "Securite" for navigational safety.

During the Second World War, additional codes were used to include immediate details about attacks by enemy vessels, especially in the Battle of the Atlantic. The signal SSS signalled attacked by submarines, whilst RRR warned of an attack by a surface raider, QQQ warned of an unknown raider (usually an auxiliary cruiser), and AAA indicated an attack by aircraft. They were usually sent in conjunction with the SOS distress code. All of these codes later switched from three repeats of the letter to four repeats ("RRRR", etc.).

All content from Kiddle encyclopedia articles (including the article images and facts) can be freely used under Attribution-ShareAlike license, unless stated otherwise. Cite this article:
SOS Facts for Kids. Kiddle Encyclopedia.