Built using Burmantofts terracotta, the building is now Grade II listed. It was extended along Whitworth Street, towards London Road, between 1927 and 1957 by the architects Bradshaw Gass & Hope, the delay being due to the depression in the 1930s and the Second World War. Originally a swimming pool was planned for the top floor, but after worries the weight of water might cause structural issues it was instead used as a dug in gymnasium and in more recent years as an examination hall. The lower floors contain among other departments the Royce Laboratory for mechanical engineering, named after Henry Royce. Floors are denoted by letters, from BA (lowest), then A to L (highest) missing out I. 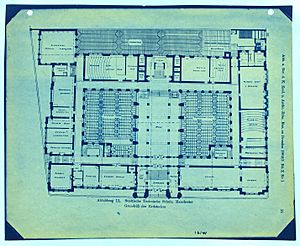 The building is bounded by Whitworth Street to the north, Granby Row to the south, Cobourg Street to the east, and Sackville Street to the west, where the original main entrance (called the Grand Entrance) lies. The entrance on Granby Row is the usual entrance to the eastern part of the building (there is another entrance on Whitworth Street only for the use of the students and staff of the University of Manchester ). The historic Godlee Observatory sits on the roof and is still in use. The building is used by the University for a number of functions and departments. These include administration, teaching and research in science and technology, and examinations.

Inside on floors D, E and F are the Joule Library (now part of the University of Manchester Library) and various offices, laboratories, lecture theatres and exam halls. The Joule Library was given this name (commemorating the physicist J. P. Joule) in 1987 when it was refurbished.

There are inscriptions at the Grand Entrance and at the Whitworth Street entrance, recording important events in the history of the building. The later part of the building was built on the site of St Augustine's Church, the third Roman Catholic chapel in Manchester. It was replaced by the second St Augustine's Church in York Street, Chorlton on Medlock. There is also a plaque recording the previous existence of Ivan Levinstein's laboratory on the site.

In the estates strategy for 2010-2020 for the University of Manchester it is stated that essentially all of the former UMIST campus, described as the "area north of the Mancunian Way," is to be disposed of. The fate of the former UMIST Main Building (Sackville Street Building) is not described. The vice-chancellor of Manchester University, Dame Nancy Rothwell, has stated that a fitting use must be found for this "fine old building."

Sackville Street Building currently serves as the home for the University of Manchester's school of Electrical and Electronic Engineering (EEE) along with providing a base for textile sciences and nuclear science at the Dalton Institute on site.

All content from Kiddle encyclopedia articles (including the article images and facts) can be freely used under Attribution-ShareAlike license, unless stated otherwise. Cite this article:
Sackville Street Building Facts for Kids. Kiddle Encyclopedia.