Sajid Khan (born December 28, 1951) is an Indian actor and singer. Born into poverty in the Bombay slums, he became the adopted son of Bollywood filmmaker Mehboob Khan, founder of Mehboob Studios. He worked in a handful of Indian films, debuting in his father's Academy Award-nominated Mother India (1957) and its sequel Son of India (1962). He later found more success overseas, working in international productions, including films and television shows in North America, such as Maya (1966) and its television adaptation, as well as the Philippines and United Kingdom. He was a teen idol in North America and the Philippines from the late 1960s to early 1970s.

Sajid was a poor child from the slums of Bombay (now Mumbai), in India's then Bombay State (now Maharashtra), before he was discovered by Bollywood filmmaker Mehboob Khan. Sajid started acting as a child appearing as the younger version of Sunil Dutt's character Birju in Mehboob Khan's Academy Award-nominated Hindi film Mother India (1957). Sajid was unknown at the time. His salary in the film was

After his debut in Mother India in 1957, he played the title role in his adopted father's next and last film Son of India in 1962. According to Rauf Ahmed, though the film was not a success at the box-office, Sajid's performance was praised by the critics. After his father's death in 1964, Sajid was sent to the United States by his mother Sardar.

He went on to achieve fame in the United States with a co-starring role alongside Jay North in the 1966 film Maya. The film's success led to a television series of the same name airing on NBC from September 1967 to February 1968 and lasting 18 episodes. The show led to Sajid becoming a "teen idol" for a short time appearing on the cover of popular magazines worldwide. He also had a short-lived singing career but was not successful. In 1968, he guest starred in an episode of the television series The Big Valley, and appeared in the music variety show It's Happening as a guest judge.

He also found success in the Philippines in the early 1970s, starring as the male lead in a number of romantic comedy films opposite leading Philippine actresses Nora Aunor and Vilma Santos. He tried to get back into Hindi films, but none of his Hindi films from 1972 to 1983 worked financially. His career's peak period was in 1966–1974 and he was more successful in English films. He made his last film appearance in the Merchant Ivory film Heat and Dust in 1983 which was successful.

It is reported that Sajid had a factory in India which made costume jewellery. 'Artistic' was the name of the retail store. Actress Rekha fell in love with him in the period 1970–72 but Sajid met his future wife and broke off with Rekha. He later divorced his wife in 1990 and has a son, Sameer. He acted in films from 1957 to 2001. 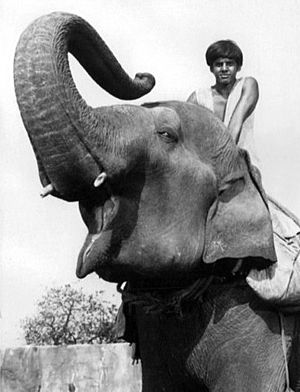 All content from Kiddle encyclopedia articles (including the article images and facts) can be freely used under Attribution-ShareAlike license, unless stated otherwise. Cite this article:
Sajid Khan Facts for Kids. Kiddle Encyclopedia.