Saline is a village and parish in Fife, Scotland, situated 5 miles (8.0 km) to the north-west of Dunfermline. It lies in an elevated position on the western slopes of the Cleish Hills.

At the 2001 Census the population was 1188, a decline from the 1235 recorded in the 1991 Census. The village has a primary school, a parish church and a golf course. The glen runs from the bottom of the main street through to neighbouring Steelend.

The village is dominated to the east-north-east by Saline Hill, 359 meters OD, with a hill fort on the eastern summit. The smaller hill to the south of east at Bandrum has a standing stone on the peak. 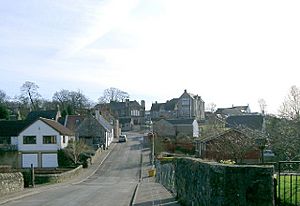 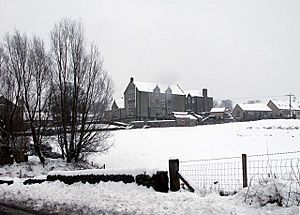 Saline Primary School and its "Sitooterie" in the snow

All content from Kiddle encyclopedia articles (including the article images and facts) can be freely used under Attribution-ShareAlike license, unless stated otherwise. Cite this article:
Saline, Fife Facts for Kids. Kiddle Encyclopedia.