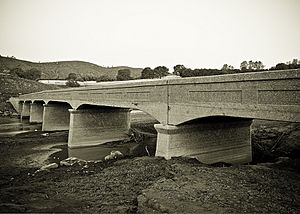 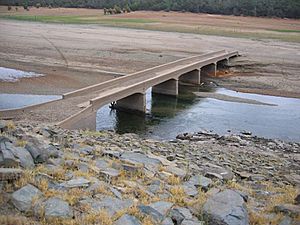 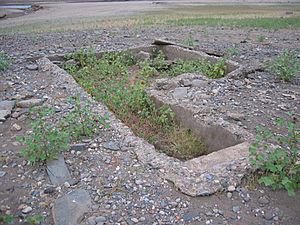 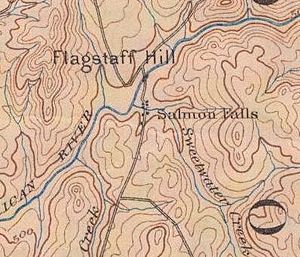 Salmon Falls is a former settlement in El Dorado County, California. It was located on the South Fork of the American River 5.5 miles (9 km) south-southwest of Pilot Hill, at an elevation of 469 feet (143 m). It was flooded by Folsom Lake. Nearby were waterfalls from which the place got its name. The site is now registered as California Historical Landmark #571.

Salmon Falls, California was an old mining town established along the banks of the American River at the mouth of Sweetwater Creek (northeast of present-day Folsom, California). Since the construction of Folsom Dam in the 1950s (which created Folsom Lake) Salmon Falls is typically immersed in water throughout much of the year. However, at low-water levels old foundations, roads, and the old Salmon Falls Bridge are easily accessible.

Remains from the local cemetery were exhumed and relocated along with remains from other town sites that were inundated by Folsom Lake after Folsom Dam was built (see Mormon Island).

All content from Kiddle encyclopedia articles (including the article images and facts) can be freely used under Attribution-ShareAlike license, unless stated otherwise. Cite this article:
Salmon Falls, California Facts for Kids. Kiddle Encyclopedia.