In early June 1858, Danish immigrants Jens Jorgensen, his pregnant wife Hedevig Marie Jensen Jorgensen, Jens Terklesen, Christian I. Kjerluf, and John Ericksen were journeying, unarmed, to settle with other Scandinavian immigrants at the Mormon colony in the Sanpete Valley. The group was traveling with an ox team hitched to a wagon and another ox hitched to a handcart.

On the afternoon of June 4, they had come within a mile and a half of Salt Creek Canyon's opening into the Sanpete Valley when members of an unidentified Indian tribe emerged from hiding places and attacked them. Two of the men were killed and burned with their wagon. Another was killed after running about 50 yards (46 m). The pregnant woman was killed near the wagon with a tomahawk, which received special note from historians. Ericksen, who had been walking some distance ahead of the others, escaped unharmed and made it to the nearby town of Ephraim around dark. The ox attached to the handcart, frightened by the attack, fled back to Nephi. The victims' bodies were brought to Ephraim for burial. The motive for the attack remains unclear. 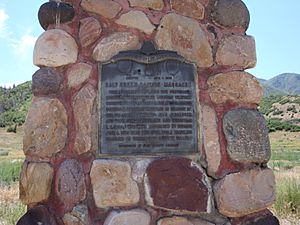 A Daughters of Utah Pioneers monument (number 11), erected in 1936 on Utah State Route 132 between Nephi and Fountain Green, Utah, marks the site of the massacre.

All content from Kiddle encyclopedia articles (including the article images and facts) can be freely used under Attribution-ShareAlike license, unless stated otherwise. Cite this article:
Salt Creek Canyon massacre Facts for Kids. Kiddle Encyclopedia.