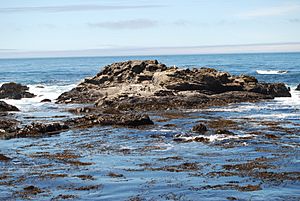 Salt Point SMCA is one of 22 marine protected areas adopted by the California Department of Fish and Game in August 2009, during the second phase of the Marine Life Protection Act Initiative. The MLPAI is a collaborative public process to create a statewide network of protected areas along California’s coastline.

The north central coast’s new marine protected areas were designed by local divers, fishermen, conservationists and scientists who comprised the North Central Coast Regional Stakeholder Group. Their job was to design a network of protected areas that would preserve sensitive sea life and habitats while enhancing recreation, study and education opportunities.

Salt Point SMCA is bounded by the mean high tide line and straight lines connecting the following points in the order listed:

Salt Point SMCA protects a complex rocky habitat which includes coves, kelp, wash rocks, shelves, walls, cobble and boulders as well as associated species like red abalone, red urchin and rockfish. Bull kelp thrives along this area and can grow up to ten inches per day as it reaches for sunlight at the ocean's surface.

Of historical interest is nearby Fort Ross State Historic Park, the southernmost settlement in the Russian colonization of the North American continent that was established as an agricultural base to supply Alaska. It was the site of California's first windmills and shipbuilding, and Russian scientists were among the first to record California’s cultural and natural history.

Salt Point SMCA prohibits the take of all living marine resources, except the recreational take of abalone and finfish. However, California’s marine protected areas encourage recreational and educational uses of the ocean. Activities such as kayaking, diving, snorkeling, and swimming are allowed unless otherwise restricted.

All content from Kiddle encyclopedia articles (including the article images and facts) can be freely used under Attribution-ShareAlike license, unless stated otherwise. Cite this article:
Salt Point State Marine Conservation Area Facts for Kids. Kiddle Encyclopedia.