Samuel Hui Koon-kit (born 6 September 1948), usually known as Sam Hui, is a Hong Kong musician, singer, songwriter and actor. He is credited with popularising Cantopop both via the infusion of Western-style music and his usage of vernacular Cantonese rather than written vernacular Chinese in biting lyrics that addressed contemporary problems and concerns. Hui is considered by some to be the first major superstar of Cantopop, known as the God of Song.

Hui was born in Guangzhou in 1948. His parents were both musicians; his father was a traditional Chinese musician while his mother was a Chinese opera singer. In 1950, along with his three older brothers, Michael, Ricky, and Stanley, Hui and his parents arrived in Hong Kong as refugees in 1950, originally living in Diamond Hill. Hui graduated from the Faculty of Social Sciences of the University of Hong Kong, Ying Wa College and St. Francis Xavier's College in the late 1960s and early 1970s. Hui and his two older brothers, Michael and Ricky, worked on several comedies in the early 1970s. Hui has also gained credit for popularising Cantopop, by incorporating the idiosyncrasies of Western popular music into the old Cantopop genre.

Hui became the lead musician of a band The Lotus.

In the 1970s, Hui performed English songs that were popular in Britain and the United States. He wrote the theme songs for the comedies produced by his brother, Michael Hui, and started performing Cantonese songs. Sam Hui's first Cantonese hit, "Eiffel Tower Above the Clouds" (鐵塔凌雲) -- originally titled "Here and Now" (就此模樣) -- was first played on the Hui Brothers Show in April 1972.

Hui signed a contract with Polydor and produced his first single in English, "April Lady".

Hui's music gained popular appeal, particularly with the working class, for its simplicity and the relevance of the lyrics. A prolific songwriter, a noted recurring theme in his music is that it often describes or humorously satirises Hong Kong society and events.

In the album The Private Eyes, it humorously reflected on the harsh realities of middle and lower-income Hong Kongers. Others such as "Song of Water Use" (制水歌), which referenced the days of water rationing during the 1960s, and "Could Not Care Less About 1997" (話知你97), which encouraged Hong Kong people to adopt a carpe diem attitude instead of worrying about the imminent handover to the People's Republic of China on 1 July 1997, were more topical in nature and referenced local events. While some of his songs are lighthearted, others carried philosophical messages brought out through artful use of Chinese words that have multiple symbolism. Examples can be seen in his farewell song in 1992 and "From the Heart of a Loafer" (浪子心聲), where for Cantopop, the sophisticated language and messages were rare in the lyrics of contemporary artists.

On June 17, 1979, Hui became the first singer from Hong Kong to perform at the Tokyo Music Festival.

Hui signed a contract with Golden Harvest in 1971. On a personal note, Hui is closer to his middle brother Ricky (deceased 8 November 2011) than to their oldest brother Michael. Sam and Michael reportedly fell out with each other after their pre-1985 successes. However, in Michael's Chicken and Duck Talk (1988), Hui appeared in a short 1-minute cameo, playing the role of himself as master of ceremonies at the grand opening of Danny's Chicken, and contributed to its theme song for its end credits entitled "You Have Your Say" (你有你講). Then in 1990, the three brothers reunited in Front Page, a lampoon on Hong Kong's sometimes over-zealous entertainment news industry. Hui also collaborated with several popular singers such as Leslie Cheung both musically and on-screen culminating in the hit single written by Hui and composed by Cheung entitled Silence is Golden (沉默是金), which Cheung also sung as a solo track on his 1987 album, Hot Summer, as well as the catchy tune, I've Never Been Afraid (我未驚過) in 1989 as the end theme for Aces Go Places V.

Hui also starred in the Aces Go Places, a series of Hong Kong action–comedies in the 1980s, with Karl Maka.

He was once seriously injured while filming The Legend of Wisely in Tibet due to lack of oxygen, thereafter falling very ill and many of his fans pointed out that this near fatal accident may have been pivotal on his decision to retire as they superstitiously believed that he was haunted by a spirit.

During the late 1980s, Hui's father advised him to retire to avoid the stresses he endured from hosting concerts. Hui's "lack of oxygen" suffered on a previous film, was actually carbon monoxide poisoning. His mother purportedly also had reservations about his performing, including that he might injure himself on stage.

A Hong Kong concert in 1990 supposedly marked his early retirement, however Hui then agreed to host a 42-show concert series. Around the time of the 30th show, Hui's father died but despite his grief, he continued to host.

In 1991 to 1992, Hui held a many farewell concerts. Hui hosted a total of 14 shows in Hong Kong preempting his actual retirement.

Hui is known as the Canto-pop godfather and the Elvis Presley of Hong Kong.

Hui also hosted shows in Canada, in Vancouver, at the Pacific Coliseum, and Toronto, Ontario, which he dedicated to his late father. Despite reiterating his plans for retirement, Hui came back for a short stint in the movie Winner Takes All co-starring Nicholas Tse and Ruby Lin. This he maintained, was a result of being unable to ignore his heart's desire. 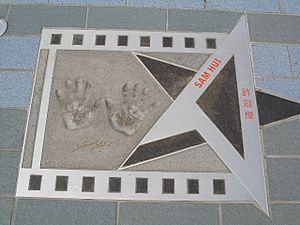 The handprint and autograph of Sam Hui at the Avenue of Stars, Hong Kong

Widely acclaimed as the "God of Song" in Hong Kong (the first singer to be so acknowledged), he decided to come out of retirement in 2004 and held multiple comeback concerts in which he was welcomed by a Hong Kong public at sell-out shows. In these concerts, he paid tribute to his recent passed close colleagues, Leslie Cheung and Anita Mui in 2003 and claimed that their deaths had influenced his decision to return to performing, culminating in his 2004 comeback song '04 Bless You ('04 祝福你). Hui performed in a concert in Kuala Lumpur on 19 and 20 February 2005 with his brother, Ricky Hui, and sons but has not made active plans for any follow-ups. He also performed in Vancouver on 15 December 2005 and in Singapore on 29 March 2008.

In December 1971, Hui married Rebecca "Rebu" Fleming, a Filipino-American. They have two sons, Ryan Hui and Scott Hui. Hui and his family live in Hong Kong. Ryan Hui is a singer-songwriter and has released several albums, and Scott Hui is a film director.

All content from Kiddle encyclopedia articles (including the article images and facts) can be freely used under Attribution-ShareAlike license, unless stated otherwise. Cite this article:
Sam Hui Facts for Kids. Kiddle Encyclopedia.