San Antonio Missions National Historical Park is a National Historical Park and part of a UNESCO World Heritage Site preserving four of the five Spanish frontier missions in San Antonio, Texas, USA. These outposts were established by Catholic religious orders to spread Christianity among the local natives. These missions formed part of a colonization system that stretched across the Spanish Southwest in the 17th, 18th, and 19th centuries.

The fifth (and best known) mission in San Antonio, the Alamo, is not part of the Park. It is located upstream from Mission Concepción, in downtown San Antonio, and is owned by the State of Texas. The Alamo was operated by the Daughters of the Republic of Texas until July 2015, when custodianship was turned over to the Texas General Land Office.

On July 5, 2015, the San Antonio Missions National Historical Park, along with the Alamo Mission in San Antonio, was designated a UNESCO World Heritage site.

The park was originally established in 1975 as the Mission Parkway on the National Register of Historic Places encompassing 84 separate historical sites along the San Antonio River on the southern side of the city of San Antonio. Within this listing, the National Historical Park was authorized on November 10, 1978. It was established on April 1, 1983, containing many cultural sites along with some natural areas. Portions of the four missions are owned by the Archdiocese of San Antonio and are still run as active parishes.

In 1905, custodianship for the Alamo was entrusted to the Daughters of the Republic of Texas (DRT). In 2010, the office of the Texas Attorney General received a complaint that the DRT had been mismanaging not only the site, but the funds allocated for its management, and an investigation was begun.

After two years, the Attorney General's office concluded that the DRT had mismanaged the Alamo, and cited numerous instances of misconduct on the DRT's part, including failing to properly maintain the Alamo in good order and repair, mismanagement of state funds, and breach of fiduciary duty.

During the course of the investigation, in 2011, a state law was passed, signed by then-governor Rick Perry, to transfer custodianship of the Alamo from the DRT to the Texas General Land Office (GLO). The transfer was officially enacted in 2015. While the DRT initially objected to the Attorney General's report, and even went so far as to file a lawsuit to prevent the transfer, the organization eventually vowed to work with the Texas GLO to preserve the Alamo for generations to come.

In July 2015, the missions were added to the list of UNESCO World Heritage Sites. 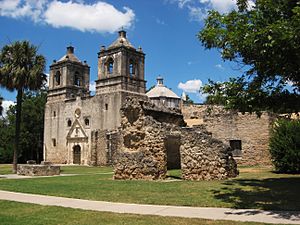 In 2002, Archbishop Patrick Flores appointed Father Jim Rutkowski the archdiocesan administrator of Mission Concepcion. As such, Fr. Rutkowski has been charged with the pastoral duties associated with the operation of the active church congregation. In 2009-10 Las Misiones Foundation began an active, aggressive campaign to restore the interior of the Mission. Restoration of the mission's interior was completed in March 2010 after six months of work. Fr. Rutkowski continues to offer Sunday Mass regularly for the Mission community. 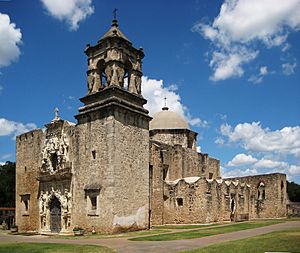 Misión San José y San Miguel de Aguayo was established in 1720. Located at 6519 San Jose Drive, it was designated the San Jose Mission National Historic Site in 1941. The historic site was administratively listed on the National Register on October 15, 1966. The church, which is still standing, was constructed in 1768. Mission San Jose was founded by Father Antonio Margil. 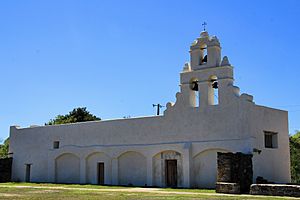 Misión San Juan Capistrano was established in 1716 as Misión San Jose de los Nazonis in East Texas. The mission was renamed and moved in 1731 to San Antonio. Located on Mission Road, San Juan was listed on the National Register on February 23, 1972. 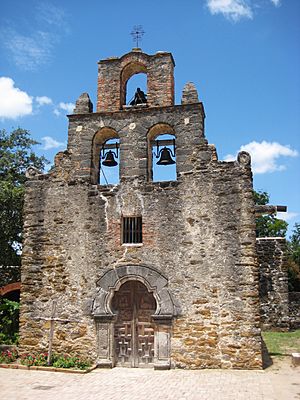 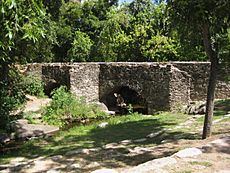 The Park includes two other locations listed on the National Register of Historic Places:

All content from Kiddle encyclopedia articles (including the article images and facts) can be freely used under Attribution-ShareAlike license, unless stated otherwise. Cite this article:
San Antonio Missions National Historical Park Facts for Kids. Kiddle Encyclopedia.