SDAI became a nonprofit in 1963 and was dedicated to showcasing artists from the Southern California/Baja Norte region. In preparation for its 75th Anniversary, in 2014 under the leadership of Executive Director Ginger Shulick Porcella (2014-2017), the San Diego Art Institute shifted its focus. The San Diego Art Institute is now recognized as an experimental, bi-national contemporary art center with a focus on the artists of Southern California and Northern Baja. 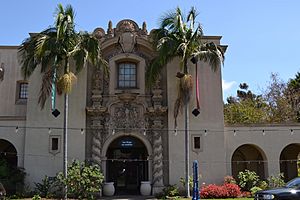 In 1941, a group of San Diego businessmen met in the office of then Director of the Fine Arts Gallery in Balboa Park, Reginald Poland. These men were interested in forming a group, which would have as its chief objective the painting of local characteristic and historical scenes of San Diego and vicinity. Following the organizational meeting, invitations were issued to painters known to be interested in preserving the memories of the fast disappearing early landmarks of San Diego County. In May, a re-organizational meeting was held, at which time the name "San Diego Business Men’s Art Club" was adopted. The first president was Walter W. Austin, former Mayor of San Diego. The first instructor of this group was Maurice Braun, well known in all of southern California for his mellow California landscapes as well as for his unusual teaching ability. Otto Schneider, Alfred R. Mitchell and many others also acted as instructors of this enthusiastic outdoor painting group. Exhibitions of the work of club members were held at various places; the first one-man show to be held by a member of this original group was by Charles Small in Bohnen’s Studio at Fifth and Laurel Streets.

In 1942 the San Diego Business Men’s Art Club negotiated with the City for studio quarters in the Spanish Village in Balboa Park. Before this arrangement could be consummated, World War II intervened; Balboa Park was requisitioned for use in the war effort. During the war the Club was relatively inactive, except for a member exhibition in the La Jolla Art Center in June 1944. After the end of the war, interest in the project was revived and the club was reorganized at a meeting held on April 4, 1947. During this year increasing activity was generated and many fine outdoor painting sessions resulted, including one at the Pine Hills ranch of Fred Heilbron, one of the original members. Several exhibitions of paintings by old and new members were held, one of which was at the San Diego Club with an attendance of more than 140 people. During this year E. H. Pohl and Ben Vaganoff were added to the list of club instructors. 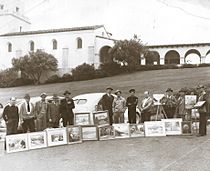 In 1949 the efforts of the club were increased and expanded. Exhibitions were held in numerous business establishments, hotels and schools. In 1950 these exhibitions were extended to outlying locations such as the Hoberg Hotel in Borrego Springs and the Carlsbad Hotel in Carlsbad.

The San Diego Business Men's Art Club had grown in activities and public relations to such an extent that a headquarters and gallery were sorely needed. During World War II the Fine Arts Society of San Diego was forced to evacuate its galleries in Balboa Park and move, originally to 2324 Pine Street, and then to 2030 Sunset Boulevard, a fine old home which was a gift of Mr. and Mrs. Frank E. Marcy to the Fine Arts Society for use as its wartime temporary headquarters. Following the return of the Fine Arts Society to its galleries in Balboa Park after the war, the Sunset Galleries were left vacant. E. T. Price, at that time president of the Fine Arts Society, offered the use of the gallery at 2030 Sunset Boulevard for its headquarters and gallery; many exhibitions, social affairs, classes, lectures, and educational and cultural meetings were held there. Exhibitions of club's workwere held continuously, with the show changed at monthly intervals. Visiting exhibitions were held, not only of paintings but of photography and other arts and crafts. Field painting excursions continued e under the supervision and instruction of one of the faculty members. During this time Alfred E. R. Van de Veide, Carlos Verharen, J. Milford Ellison, J. Roland McNary and Earl Schrack were added to the faculty, while Elsey Taft became curator.

SDAI exhibits artwork by artists mainly living and working in the Southern California/Baja Norte region (Los Angeles to Tijuana). While past programs have focused solely on monthly regional juried exhibitions, SDAI has shifted their focus towards themed and curated exhibitions. Opportunities for artists are frequently posted on their website.

Past curators-in-residence include: Alex Young, Andy Horwitz, and Amanda Cachia.

The House of Charm

The House of Charm was called the Indian Arts Building when it was originally created for the Panama-California Exposition in 1916. The lath and plaster structure was renamed the Russia and Brazil Building in 1917, the Exposition's second year. It acquired its current name, the House of Charm, during the California Pacific International Exposition in 1935. Like many other Exposition buildings within the Park, the House of Charm was taken over by the military during World War II. In 1996, because of deterioration, the building was torn down and rebuilt to its original appearance. Represented on the National Register of Historical Places, the House of Charm is now home to the San Diego Art Institutes's Museum of the Living Artist as well as the Mingei International Museum and three full-scale rehearsal spaces belonging to the Old Globe Theatre.

All content from Kiddle encyclopedia articles (including the article images and facts) can be freely used under Attribution-ShareAlike license, unless stated otherwise. Cite this article:
San Diego Art Institute Facts for Kids. Kiddle Encyclopedia.