The San Diego Model Railroad Museum is a model railroad exhibit in San Diego, California. At 27,000 sq. ft., it is the largest such indoor exhibit in North America, and one of the largest in the world. The museum is on the lower level of the Casa de Balboa Building on the Prado in Balboa Park. The museum is open Tuesday through Friday 10 AM - 4 PM, Saturday & Sunday 11 AM - 5 PM and is closed on Mondays.

Nearly three million people have passed through the center since it opened in 1982. 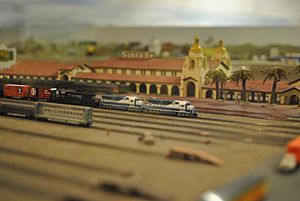 The San Diego Model Railroad Museum opened in 1982 with a mission to "preserve the heritage of railroading through a series of miniature representations of California railroads, research and preserve the history of model railroading, and educate the public in the many different aspects of railroading."

The museum has a specialized library related to both model railroading and real railroads. The library has a collection of books, magazines, VHS tapes, blueprints and other materials for research. It is a reference library and the materials do not circulate, but it is open for any attendee of the museum.

The model railroads were built and are maintained by four local railroad clubs, which exhibit their respective displays as nonprofit organizations. The clubs are:

All content from Kiddle encyclopedia articles (including the article images and facts) can be freely used under Attribution-ShareAlike license, unless stated otherwise. Cite this article:
San Diego Model Railroad Museum Facts for Kids. Kiddle Encyclopedia.