The Dominican city of San Felipe de Puerto Plata, usually called just Puerto Plata is the head municipality of the Puerto Plata province, on the north (Atlantic) coast of the country.

The city was called first Puerto de Plata but later it was changed to just Puerto Plata, the name that is still used 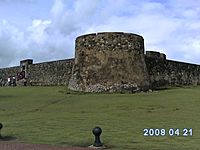 Columbus visited the Puerto Plata Bay on 11 January 1493. The city was founded and built by Nicolás de Ovando in 1502. Soon it became the most important port in the northern coast of the Hispaniola island and, in 1508, the king of Spain gave a coat of arms to the city.

Because there were many pirates and other British and French ships along the northern coast of the island, a fort was built here by orders of Carlos I, king of Spain; its construction took several years and it was finished in 1577. Because at that moment the Spanish's king was Felipe II, the fort was named Fuerte San Felipe (in English, Saint Phillip Fort).

The Cordillera Septentrional ("Northern mountain range") runs along the southern half of the municipality. There are only two roads that go through this mountain range. It rains a lot in these mountains.

The mountain "Loma Isabel de Torres" (the "Monte de Plata" of Columbus) is at about 5 km (3.1 mi) to the southeast of the city of Puerto Plata. It stands alone even if it is part of the Cordillera Septentrional. On top of the mountain, there is rainforest because it gets a lot of rain there; it rains almost every day. That forest is now a national park. It is 799 m (2,621 ft) high and there are two ways for getting to the top: by road or by a cable car (a type of car that runs on cables above the car).

There are many rivers in the municipality but, because the Cordillera Septentrional is close to the coast, they are all very short. The two most important rivers are Camú del Norte and Yásica. Two small rivers that are close to the city are San Marcos and Muñoz.

There are some bays along the coast. Two of them are the Puerto Plata Bay and Maimón Bay.

Puerto Plata has a tropical wet climate (Köppen-Geiger classification: Af) with no dry or cold season as it is constantly moist (rainfalls during the whole year).

All content from Kiddle encyclopedia articles (including the article images and facts) can be freely used under Attribution-ShareAlike license, unless stated otherwise. Cite this article:
San Felipe de Puerto Plata Facts for Kids. Kiddle Encyclopedia.