The San Manuel Band of Mission Indians is a federally recognized tribe of Serrano people in San Bernardino County, California. The band is made up of the Yuhaviatam clan of Serrano people, who have traditionally lived in the San Bernardino Mountains. The other federally recognized Serrano tribe is the Morongo Band of Mission Indians, located in Riverside County, California.

San Manuel Reservation is a federally recognized Indian reservation in San Bernardino County. Originally, it was 658 acres (266 ha) in size, but has expanded to 800 acres (320 ha). Established in 1891, the reservation was named for Santos Manuel, a prominent tribal leader.

In December 2016, the tribe arranged lighting of the Arrowhead landmark for 14 nights, in honor of the 14 victims killed by domestic terrorists the year before in San Bernardino County. This is a California Historical Monument and namesake for various local places. Together with the Morongo Band of Mission Indians of Southern California, the San Manuel Band made a "joint donation totaling $600,000 to the San Bernardino United Relief Fund shortly after the shooting last year. 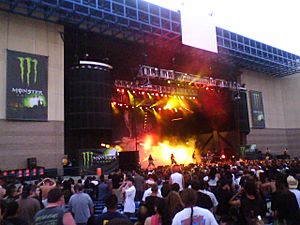 Lamb of God playing at Ozzfest at the San Manuel Amphitheater in Devore, 2007

The San Manuel band employs more than 3000 people and is one of the primary employers in the Inland Empire region of California. They own and operate San Manuel Indian Bingo and Casino, Serrano Buffet, The Pines, SportsWatch Grill, Tutu's Food Court, and the Snack Shack, all located in Highland. They also fund the San Manuel Amphitheater, located near Devore.

The reservation is served by the San Bernardino City Unified School District.

All content from Kiddle encyclopedia articles (including the article images and facts) can be freely used under Attribution-ShareAlike license, unless stated otherwise. Cite this article:
San Manuel Band of Mission Indians Facts for Kids. Kiddle Encyclopedia.