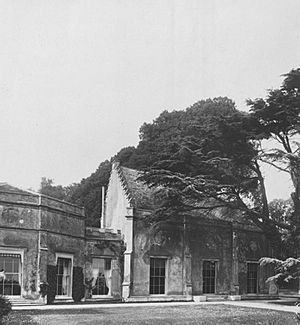 Sandleford Priory was a small Augustinian Priory, the remains of which now stand at Sandleford in the civil parish of Greenham in the English county of Berkshire.

Archbishop (and Cardinal) Stephen (Langton) (c.1150–1228) (Archbishop of Canterbury, 1207–1228), in its confirmation charter stated that the house was dedicated to the honour of St. John Baptist (and the Blessed Virgin Mary and all the Saints). The original seals on the charter featured those of the Archbishop of Canterbury Hubert Walter, the Bishop of Sarum Herbert le Poer (Poore), William of Perche (died 1226) bishop of Châlons, and Stephen of Perche (killed in 1205);

The Priory of St John the Baptist at Sandleford was founded for the Augustinian Canons Regular by Geoffrey, Earl of Perch and his wife Maud some time between 1193 and 1202.

In 1274, Maud de Clare, Countess of Gloucester and Hertford made arrangements to refound it as a double house for Fontevrault Benedictine nuns and brothers, but this did not come about. It was dissolved in 1478 and abandoned by the remaining monks after years of mismanagement by a prior. The ownership fell into the hands of the Bishop of Salisbury, and circa 1480 passed to the Dean and Chapter of Windsor. The old priory chapel is the present library. The remains were converted to a country house.

On 31 August 1320, King Edward II was at Sandleford Priory, where he apparently tarried for the night.

One of the last of the priors was a man named Simon Dam who was dismissed after he was cause with his mistresses, Thomasina, at the Priory in 1440.

The number of canons at the priory eventually dwindled until at the death of the last prior in 1478 when there were none left. 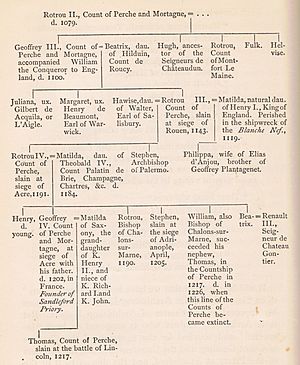 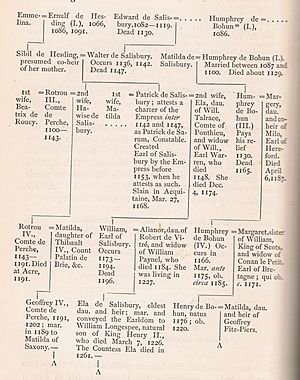 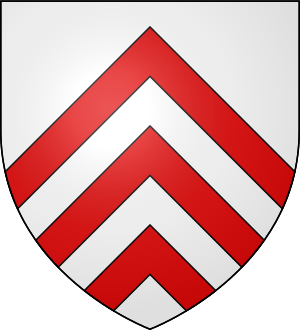 Shield of Perche. An heraldic device similar to that used by the De Clare family. 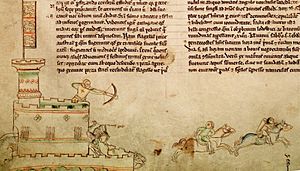 A 13th-century depiction of the Second Battle of Lincoln, which occurred at Lincoln Castle on 20 May 1217 during the First Barons' War between the forces of the future Louis VIII of France and those of King Henry III of England. Louis' forces were attacked by a relief force under the command of William Marshal, 1st Earl of Pembroke. Thomas du Perche, the Comte de la Perche, who was commanding the French troops, was killed; the illustration depicts his death. Perche had come to England to try and recover the honour of Perche which had been lost in 1204 by his mother (a niece of John, King of England) – this included Newbury and Shrivenham in Berkshire, Toddington in Buckinghamshire, and Haughley in Suffolk. This heavy defeat led to Louis being expelled from his base in the southeast of England. 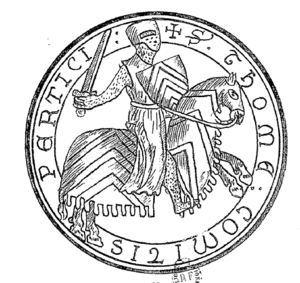 Matilda and Geoffrey III, fourth Count of Perche, founded Sandleford Priory between 1193 and 1200. In addition to the freehold of the site and 600 or so acres, all the lands at Sandleford, as it is bound by hedges and ditches, with all its appurtenances, an annuity of 13 marks from the mills of Newbury was allocated for the support of the house.
Geoffrey's grandfather the great Rotrou III, Count of Perche (1084-killed 1143/44) married (1136) Hawise (Harwise or Hedwig) d'Evereux (1118–1152), daughter of Walter (d'Evereux) of Salisbury by Sibyl de Chaworth (de Chaources, alias Mundublel, alias de Cadurcis). Sibyl's parents who married in 1118 were Maud/Matilda de Hesdin and Patrick de Chaources. Sibyl was thus a granddaughter of the modern era founder of Newbury the Lord of Ulvritone, Ernulf de Hesdin (died Antioch, 1097). Hawise was an elder sister of Patrick of Salisbury, 1st Earl of Salisbury (c. 1122 – 1168) and of Sibyl Marshal.
Hawise and Rotrou III's son, Count Geoffrey's father, Rotrou IV, count of Perche and Mortagne, was slain during the Third Crusade the at Siege of Acre, having married Matilda (died 1184) daughter of Theobald IV.
Hawise's younger sister Sibyl (1120-) married John Marshal, and their sons John the Marshall, William Marshal, 1st Earl of Pembroke and Henry Marshall (bishop of Exeter) (died 1206) were thus Geoffrey's first cousins-once-removed. After Count Thomas Perche's death, at the Battle of Lincoln leading the forces of the Capetain Prince Louis against King John and his noble cousin William Marshal, 1st Earl of Pembroke (died 1219) in 1217, his noble kinswoman, a second cousin once removed, Ella or Ela of Salisbury, 3rd Countess of Salisbury, daughter of William of Salisbury, 2nd Earl of Salisbury, and wife of William Longespée (Longspey), 3rd Earl of Salisbury claimed some of his property, including Newbury. William Longspey, Lord Salisbury, was uncle of Henry III.
The connection of John le Marshal (died 1194) and his younger brother William Marshal, 1st Earl of Pembroke (died 1219), of Newbury Castle, Hamstead Marshall to Sandleford also shown by the former's mistress Alice de Colville (died before 1220?) of Maidencourt, East Garston giving six-quarters of wheat (28 pounds x 6 = 168 pounds = 12 stone) from Maidencourt to the Priory of Sandleford for praying for their souls.

In 1195 Geoffrey was described by the chronicler as a man whose soul was naturally grand and magnanimous [whose] sole happiness was to consecrate his fortune in fostering religion and relieving suffering humanity [in conjunction with] his noble and pious wife Matilda. 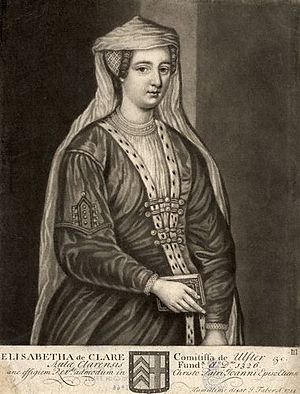 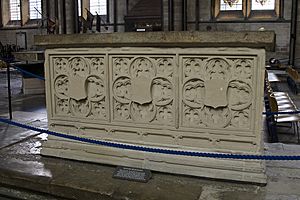 The original rhomboid shaped endowment for the Augustinian priory of Sandleford read something like:

with the church and all the lands at Sandelford [Sandleford, aka Sandaleford : ford of the river Ale-burne], as it is bounded by hedges and ditches [i.e. enclosed] and all its appurtenances, And the whole of the wood which is called Brademore [Broadmore], And the whole of the land on each side of the wood, as it is bounded on one side by the watercourse which is called the Aleburne [River Enborne] from the Bridge of Sandleford up to the Aleburne-gate, and on the other-side as far as it is bounded by the road which reaches from Aleburne-gate towards Newbury as far as the croft of William the Hunter, and on the third side so far as the road is carried, thence to the croft of Robert the son of Renbaldi, [Robert fitz Rembaldand], – that is the road that leads to Newbury, and on the fourth side as it is bounded by the same road [A339] as far as the bridge of Sandleford.

An extract of the original Latin foundation description:

The taxation roll of Pope Nicholas IV in 1291 names temporalities (secular properties and possessions) that the prior of Sandleford held, which were worth (per annum):

The priory of Sandleford held land in nearby Midgham. In the 13th century this was assessed as one carucate (normally 120 acres). There were still 37 acres of meadow there that had been leased to those who also leased Sandleford. This connection was mentioned down to the end of the eighteenth century, by when the meadow land was let to members of the Hillersdon, and Poyntz families of Midgham House, viz: William Poyntz (died 1809), John Spencer, 1st Earl Spencer of Althorpe (son-in-law of Stephen Poyntz), Rt. Hon. Stephen Poyntz, and John Hillersdon (died 1730). One of the younger sons of George II, Duke of Cumberland (1721–1765), was partially bought up at Midgham in the household of his governor and steward Stephen Poyntz.

In 1312 Prior Thomas de Sandleford obtained a licence for alienation in mortmain to this convent of a messuage, 20 acres of land, and 2 acres of meadow in 'Clere Wodelond,' by Kingsclere, Hampshire.

In 1235 the Prior of Sandleford obtained from King Henry III the right to hold a charter fair of four days during the Feast of Saint Matthew the Apostle (21 September), and perhaps another two days around 20–23 September. Suitably enough, 780 years later, the present day Newbury Show, aka Royal County of Berkshire Show, is held over those days. Perhaps one is the successor of the other, afteral the first annual Newbury and District Agricultural Show was held in 1909 on land included in the Priory's original 1190s endowment at Enborne Gate Farm, aka Alburnegate.

In 1293, King Edward I granted the priory free warren on all its demesne lands at Sandleford and Enborne; so long as nevertheless those lands are not within the bounds of our forest. (Note that forest does not mean woods).

After its abandonment by the canons, the old monastery and its estate was granted to the Dean and Canons of Windsor who leased it out for use as a farm. Few of its tenants lived there, but included: 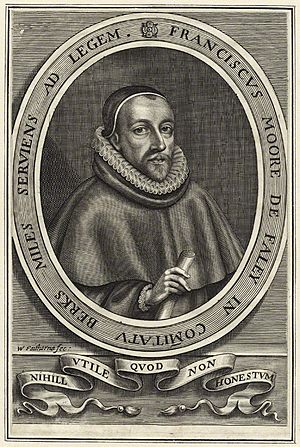 In October 1642, Colonel John Venn and twelve companies of foot soldiers took possession of Windsor Castle on behalf of Parliament, and soon after 23 May 1643 the Dean (Dr. Christopher Wren) and Canons left. On 17 October 1650 Sandleford and the estates that had come to the Dean and Canons of Windsor via Sandleford would have been included in an Act for sale of the Manors of Rectories and Glebelands late belonging to the late Archbishops, bishops, Deans, Deans and Chapters was passed, and in an Additional Act for more speedy effecting the sale of the Manors of Rectories and Glebe-lands late belonging to Archbishops, Bishops, Deans, Deans and Chapters, and other Officers and Titles which late were of or belonging to any Cathedral or Collegiate Church or Chapel in England or Wales; and for the encouragement of lenders upon the security thereof; and of other Lands and Hereditaments of the said Deans, Deans and Chapters, etc. which was added on 22 October 1650.

A quitclaim dated 20 May 1662 states: Alexander Staples of the Middle Temple and Thomas Staples of the same for £200 paid by the Dean and Canons renounce and give a quittance of all their rights in Sandleford Priory. The scite of Sandelford Priory was by the trustees appointed by act of Parliament, 20 June 1651, sold to Thomas Bales of the Middle Temple, and he 25 February sold the same to Alexander Staples, and he settled it on Thomas Staples and his heirs. 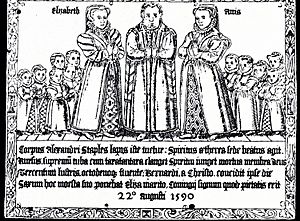 Rubbing of the Brass tomb plate of Alexander Staples of Yate Court (d. 1590), showing with his many siblings his son Alexander.

Thomas Staples of Maidenhead, was named as the Steward of Windsor Court in the case of Vasper & wife v [James] East, 1685. One of the judges was George Jeffreys, 1st Baron Jeffreys and at the time Henry, Earl of Arundel & Lord Mowbray was Constable of Windsor Castle.

By January 1689/90 however, Thomas Staples was proving to make the Oath to the new King. The House of Lords Journal, Volume 14, for 22 January 1689 reports that: Staples, Steward of Windsor, sent for, for refusing to give the Oaths. Upon Information given to this House, 'That Mr. Thomas Staples, Steward of Windsor Forrest, hath refused to give the Oaths of Allegiance and Supremacy and the Test to Mr. Charles Cleve Master of the Hospital of Oakingham, and Mr. William Walker Vicar of Sunning: It is thereupon ORDERED, by the Lords Spiritual and Temporal assembled at Westminster, That the said Thomas Staples be, and is hereby, required to attend this House on Friday next, being the 25th Day of this Instant January, at Ten of the Clock in the Forenoon, as he will answer the contrary to this House at his Peril.'

And on 'DIE Veneris, 25 die Januarii.' Staple's Examination about refusing to tender the Oaths deferred. The House being moved, 'That Mr. Thomas Staples, Steward of Windsor Court, who, by Order of the 22th [sic] Instant, was to appear this Day, attended at the Door; but not being able to get his Witnesses ready against this Day, might have longer Time given him for that Purpose:' It is ORDERED, by the Lords Spiritual and Temporal assembled at Westm. That the said Thomas Staples be, and is hereby, required to attend this House on Friday the 8th Day of February next, at Ten of the Clock in the Forenoon.

The house was eventually leased to the Kingsmill family who converted the remains of the priory into a country house. It is now the home of St Gabriel's School.

All content from Kiddle encyclopedia articles (including the article images and facts) can be freely used under Attribution-ShareAlike license, unless stated otherwise. Cite this article:
Sandleford Priory (monastery) Facts for Kids. Kiddle Encyclopedia.