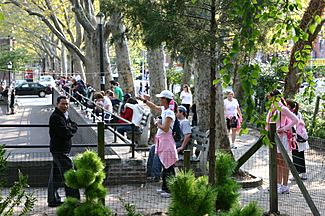 Western side of the park 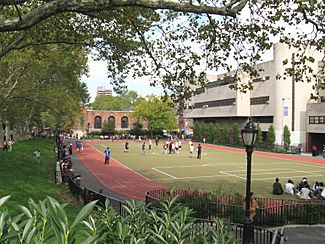 Sara Delano Roosevelt Park is a 7.8-acre (32,000 m2) park in the Lower East Side of the New York City borough of Manhattan. The park, named after Sara Roosevelt (1854–1941), the mother of President Franklin Delano Roosevelt, stretches north-south along seven blocks between East Houston Street on the Lower East Side and Canal Street in Chinatown, bordered by Chrystie Street on the west and Forsyth Street on the east. The park is operated and maintained by the New York City Department of Parks and Recreation.

The park cuts off Stanton, Rivington, Broome and Hester Streets between Chrystie and Forsyth Streets, and is crossed by Delancey and Grand Streets.

The site was previously occupied by walk-up apartments and before that, an African-American burial ground. Originally, part of it was the Dutch Reformed Church Cemetery.

The land was originally acquired by the City of New York in 1929 for the purpose of widening Chrystie and Forsythe Streets and building low-cost housing, but was instead used for parkland. The new park was named for Sara Roosevelt in 1934 despite her written objection. It was designed under the leadership of newly installed Parks Commissioner Robert Moses, landscape architect Gilmore D. Clarke, and architect Aymar Embury II. The original design placed an emphasis on athletic fields and "active recreation" spaces for children, such as wading pools, with separate areas for boys and girls.

In later decades, community groups adapted the park to various uses. The Sara D. Roosevelt Park Coalition, formed in 1982, established the M’finda Kalunga community garden in 1983, and has initiated several other initiatives. Another group, the Forsyth Garden Conservancy, has built several smaller gardens inside the park since the mid-1990s, including the Hua Mei Bird Garden, where songbird owners congregate.

The park offers playing surfaces for several sports, including a basketball court, roller skating rink and a soccer field. It is also the home of the New York City Bike Polo Club.

The park had a service facility which included a public restroom until 1994, when it was closed.

In the park, just south of Stanton Street, the M’Finda Kalunga Garden honors the memory of an African-American burial ground that was located on nearby Chrystie Street between Rivington and Stanton Streets. A commemorative plaque was installed in 1983.

Across Forsyth Street from the Park, between Stanton and Rivington Streets, was the "Garden of Eden", a community garden during 1975–1985 created by local activist and environmentalist Adam Purple.

All content from Kiddle encyclopedia articles (including the article images and facts) can be freely used under Attribution-ShareAlike license, unless stated otherwise. Cite this article:
Sara Delano Roosevelt Park Facts for Kids. Kiddle Encyclopedia.