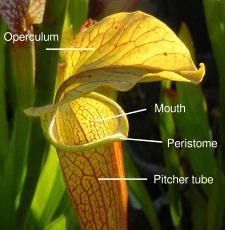 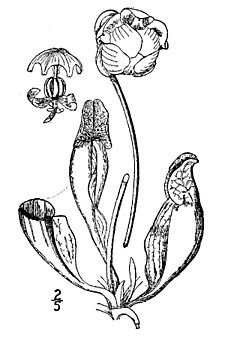 The anatomy of S. purpurea

Sarracenia is a genus comprising 8 to 11 species of North American pitcher plants, commonly called trumpet pitchers. The genus belongs to the family Sarraceniaceae, which also contain the closely allied genera Darlingtonia and Heliamphora.

Sarracenia is a genus of carnivorous plants indigenous to the eastern seaboard of the United States, Texas, the Great Lakes area and southeastern Canada, with most species occurring only in the south-east United States (only S. purpurea occurs in cold-temperate regions). The plant's leaves have evolved into a funnel or pitcher shape in order to trap insects.

The plant attracts its insect prey with secretions from extrafloral nectaries on the lip of the pitcher leaves, as well as a combination of the leaves' color and scent. Slippery footing at the pitcher's rim, causes insects to fall inside, where they die and are digested by the plant with proteases and other enzymes.

All content from Kiddle encyclopedia articles (including the article images and facts) can be freely used under Attribution-ShareAlike license, unless stated otherwise. Cite this article:
Sarracenia Facts for Kids. Kiddle Encyclopedia.