Saskatoon station is a historic railway station building in Saskatoon, Saskatchewan, Canada. It was built in 1908. It was designated a National Historic Site of Canada in 1976, and has also been protected as a Heritage Railway Station of Canada since 1990.

Saskatoon earned the nickname Hub City from the contributions of the CPR, CNR and GTP. The station was situated on the Regina, Saskatchewan to Edmonton, Alberta rail line. 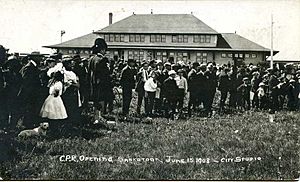 Crowd gathered for the opening of the station June 15, 1908.

Opened in 1908, the station served as a passenger depot, telegraph station, mail and freight depot. The CPR discontinued passenger service in 1960, maintaining it as an office site until 1993 when it was sold to Ken Achs who restored the building.

The CP station has not been used as a rail station for many years, and currently houses several businesses. Received the 1995 SAHS (Saskatchewan Architectural Heritage Society) Heritage Architecture Excellence Awards which was bestowed by Saskatchewan's Lieutenant-Governor.

The city of Saskatoon is served by Via Rail's The Canadian service; however, that line uses the New Saskatoon Railway Station located southwest of the downtown core.

Two other municipal heritage buildings are close to the Saskatoon Railway Station (Canadian Pacific), the Rumley Warehouse, built in 1913 and the Fairbanks Morse Warehouse. Both are located in the Central Business District which sprang up to support both the CNR railway station and railyards and the CPR. The Midtown Plaza shopping mall was built on the site of the former downtown CNR railway station in the late 1960s; in the 1990s the mall underwent a major renovation that included changing the front facade to resemble the style of the old railway station.

All content from Kiddle encyclopedia articles (including the article images and facts) can be freely used under Attribution-ShareAlike license, unless stated otherwise. Cite this article:
Saskatoon station (Canadian Pacific Railway) Facts for Kids. Kiddle Encyclopedia.