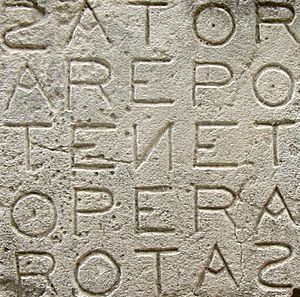 The Sator Square (or Rotas Square) is a two-dimensional word square containing a five-word Latin palindrome. It features in early Christian as well as in magical contexts. The earliest example of the square dates from the ruins of Pompeii, which some scholars attribute to pre-Christian origins, such as Jewish or Mithraic. 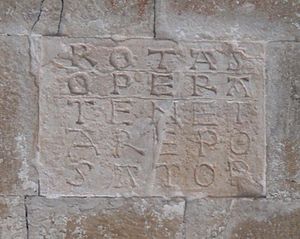 A Sator Square on the 8th century St. Peter ad Oratorium in Italy

The earliest form has ROTAS as the top line, but the version with SATOR on the top line became dominant. It is a 5 × 5 square made up of five 5-letter words, thus consisting of 25 letters in total, all derived from 8 Latin letters: 5 consonants (S, T, R, P, N) and 3 vowels (A, E, O).

It is a square two-dimensional palindrome with four symmetries (its symmetry group is the Klein four-group rather than the dihedral group of order 8, since adjacent sides of the square are not the same), being identity, two diagonal reflections, and 180-degree rotation. The text may be read top-to-bottom, bottom-to-top, left-to-right, or right-to-left; and it may be rotated 180 degrees and still be read in all those ways. 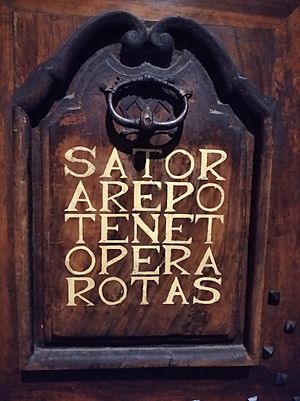 The Sator square on a wooden door in Grenoble (France)

One likely translation is The farmer Arepo has [as] works wheels [a plough]; that is, the farmer uses his plough as his form of work. An alternative would be to interpret opera as the ablative instead of the nominative. In that case, the sentence could be read as The farmer Arepo holds the wheels with difficulty (or with effort), shifting to focus on ROTAS with all its mystical connotations. The first interpretation, though not a significant sentence, is grammatical; the square can be read up and down, backwards and forwards. C. W. Ceram also reads the square boustrophedon (in alternating directions). But since word order is very free in Latin, the translation is the same. If the Sator Square is read boustrophedon, in reverse direction, the words become SATOR OPERA TENET AREPO ROTAS, with the sequence reversed and the position of ROTAS being the main difference.

The word arepo is a hapax legomenon, appearing nowhere else in Latin literature. Most of those who have studied the Sator Square agree that it is a proper name, either an adaptation of a non-Latin word or most likely a name invented specifically for this sentence. Jerome Carcopino thought that it came from a Celtic, specifically Gaulish, word for plough. David Daube argued that it represented a Hebrew or Aramaic rendition of the Greek Ἄλφα ω, or "Alpha-Omega" (cf. Revelation 1:8) by early Christians. J. Gwyn Griffiths contended that it came, via Alexandria, from the attested Egyptian name Ḥr-Ḥp, which he took to mean "the face of Apis". An origin in Graeco-Roman Egypt was also advocated by Miroslav Marcovich, who maintains that Arepo is a Latinized abbreviation of Harpocrates, god of the rising sun, in some places called Γεωργός `Aρπον, which Marcovich suggests corresponds to Sator Arepo. If one accepts that one or more deity names is encoded into the Sator square, then this word square could be considered an example of a theophoric mandala. 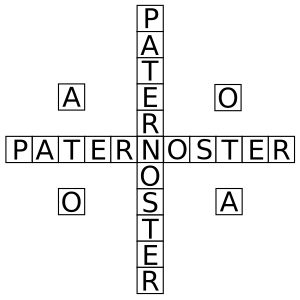 Anagram formed by the letters of the sator square

By repositioning the letters around the central letter Ν (en), a Greek cross can be made that reads Pater Noster (Latin for "Our Father", the first two words of the "Lord's Prayer") both vertically and horizontally. The remaining letters – two each of A and O – can be taken to represent the concept of Alpha and Omega, a reference in Christianity to the omnipresence of God. Thus the square might have been used as a covert symbol for early Christians to express their presence to each other.

An example of the Sator Square found in Manchester dating to the 2nd century AD has been interpreted according to this model as one of the earliest pieces of evidence of Christianity in Britain.

The Coptic Prayer of the Virgin in Bartos describes how that Christ was crucified with five nails, which were named Sator, Arepo, Tenet, Opera and Rotas. This reading of the words consequently entered the Ethiopic tradition where they became the names of the wounds of Christ. In Ethiopian tradition the words are slightly altered, with SADOR being the lance wound, ALADOR being the right-hand wound, DANAT being the left-hand wound, ADERA being the right foot wound, and RODAS being the left foot wound. These 5 words are prayed on each knot of a 41 count Ethiopian mequetaria (prayer rope).

In Cappadocia, in the time of Constantine VII Porphyrogenitus (913–959), the shepherds of the Nativity story are called SATOR, AREPON, and TENETON, while a Byzantine Bible of an earlier period conjures out of the square the baptismal names of the three Magi, ATOR, SATOR, and PERATORAS.

Other authorities believe the Sator Square was Mithraic or Jewish in origin, because it is not likely that Pompeii had a large Christian population in 79 AD and the symbolism inferred as Christian and the use of Latin in Christianity is not attested until later. James H. Charlesworth is of the view that the Sator Square is sacred to Asclepius, the serpent god, and thus sacred to all serpent gods. He suggests that one possible prayer form of this square might be: “SATOR-ROTAS (O Creator - you who cause [all] to rotate.) OPERA-AREPO (with effort I crawl toward [you].) TENET-TENET-TENET-TENET (Maintain [the rotations from the north, the east, the south, and the west].)

Known prayers for an exorcism can also be derived from rearranging the 25 letters of the square: 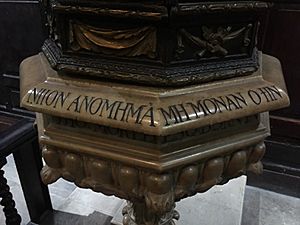 A Greek palindrome on the font at St Martin, Ludgate in London

The Sator Square is a four-times palindrome, and some people have attributed magical properties to it, considering it one of the broadest magical formulas in the West. An article on the square from The Saint Louis Medical and Surgical Journal, vol. 76, reports that palindromes were viewed as being immune to tampering by the devil, who would become confused by the repetition of the letters, and hence their popularity in magical use. The same principle, alongside the above "Paternoster cross", is also present in the Greek magical palindrome: ΑΒΛΑΝΑΘΑΝΑΛΒΑ, which probably derives from the Hebrew or Aramaic אב לן את, meaning "Thou art our father".

The square has been used in folk magic for various purposes, including putting out fires (the spell is "TO EXTINGUISH FIRE WITHOUT WATER" in John George Hohman's Long Lost Friend), removing jinxes and fevers, to protect cattle from witchcraft, and against fatigue when traveling. It is sometimes claimed it must be written upon a certain material, or else with a certain type of ink to achieve its magical effect. It is often placed on houses and barns for protection.

The Sator Square was used in Pennsylvania Dutch communities as part of their powwow medicine and in Russian Orthodox Old Believer communities. 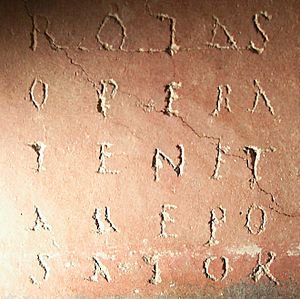 The oldest datable representation of the Sator Square was found in the ruins of Pompeii. Others have been found in excavations under the church of S. Maria Maggiore in Rome, at Corinium (modern Cirencester in England) and Dura-Europos (in modern Syria).

The Benedictine Abbey of St Peter ad Oratorium, near Capestrano, in Abruzzo, Italy, has a marble square inscription of the Sator Square. An example discovered at the Valvisciolo Abbey, also in central Italy, has the letters forming five concentric rings, each one divided into five sectors. Other Sator Squares are on the exterior wall of the Duomo of Siena, Italy, and on a memorial.

The church of Acquaviva Collecroce has inside the church a stone with the Sator square, but in inverted order, started with "Rotas". [1]

Outside of Italy, an example found in a group of stones in the grounds of Rivington Church reads SATOR AREPO TENET OPERA ROTAS. The stone is one of a group thought to have come from a local private chapel in Anderton, Lancashire. An example is found inserted in a wall of the old district of Oppède, in France's Luberon. There is a Sator Square in the museum at Conimbriga (near Coimbra in Portugal), excavated on the site.

There is one known occurrence of the phrase on the rune stone Nä Fv1979;234 from Närke, Sweden, dated to the 14th century. It reads "sator arepo tenet" (untranscribed: "sator ¶ ar(æ)po ¶ tænæt). It also occurs in two inscriptions from Gotland (G 145 M and G 149 M), in both of which the whole palindrome is written.

All content from Kiddle encyclopedia articles (including the article images and facts) can be freely used under Attribution-ShareAlike license, unless stated otherwise. Cite this article:
Sator Square Facts for Kids. Kiddle Encyclopedia.