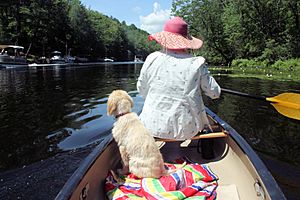 The Schroon River ( skroon) is a 67.7-mile-long (109.0 km) tributary of the Hudson River in the southern Adirondack Mountains of New York, beginning at the confluence of Crowfoot Brook and New Pond Brook near Underwood, and terminating at the Hudson in Warrensburg. Its watershed is entirely within the Adirondack Park. The river runs through the towns of North Hudson, Schroon, Chester, Bolton, and Warrensburg. 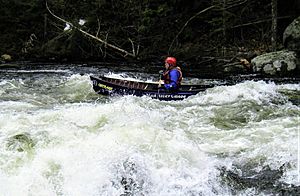 All content from Kiddle encyclopedia articles (including the article images and facts) can be freely used under Attribution-ShareAlike license, unless stated otherwise. Cite this article:
Schroon River Facts for Kids. Kiddle Encyclopedia.