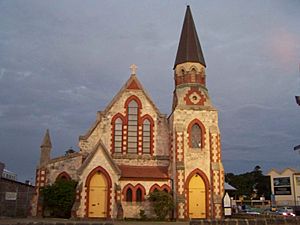 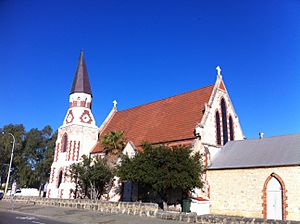 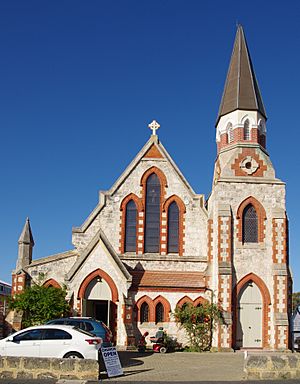 The church is constructed from ashlar limestone with red-brick quoins on the buttresses and window edges. The steeply pitched roof is constructed from timber originally with jarrah shingles but most recently with terra cotta tiles. When originally built the church consisted of a nave and an aisle on the north western side; the vestry is at the north-eastern end of the aisle with a connecting tower and porch at the south-western end facing Norfolk Street, which acts as the main entrance. The building style is rustic gothic, composed of stone in irregular coursed work, with red brick moulded windows and door jambs. There are moulded brick dripstones rising from plaster and terra cotta corbels. The window sills, plinths, mouldings and steps of buttresses are rendered in cement stucco. The buildings exterior is rough stone and brickwork with the brick pointed, in black and white mortar. The tower is 75 feet (23 m) tall with an octagonal spire.

The main facade comprises the tower and spire, porch and triple lancet windows fitted with stained glass. The church now has a capacity of 80 in the main hall and 25 in the lesser hall.

The church pipe organ was built in 1897 by Alfred Fuller of Kew, Victoria, and is one of the last he built before his business closed in 1900. It was delivered and installed in the church prior to 1901. The longest pipes of the organ are situated on either side of the console and in towers at floor level. There are two manual chests with no internal passage board between them. The console has an attached drawstop with a roll top, there are two composition pedals to great and two to swell. It has a mechanical key and stop action and four couplers. The organ was restored by F.J.Larner and company in 1990 with the pipes restored sometime later by Pipe Organs of Western Australia.

The Free Church of Scotland commenced services in Perth in 1849 at St. Andrew's Church in Pier Street. A congregation of the Scots Church was established in Fremantle in 1885 with services delivered by a lay preacher. Rev. Robert Hamlin arrived in 1886 and held his first service on 16 October 1887 in the Oddfellow's Hall and later in the supper room of the Fremantle Town Hall. Hanlin soon set about seeking donations, locally and in the eastern states, to build a permanent church in Fremantle. A loan of £1,000 was granted by the Colonial Committee in Scotland and a local bank also advanced funds. Hanlin acquired the 0.121 hectares (0.30 acres) South Terrace site (Fremantle Town Lot 1360) for £208 in June 1889 for the Commissioners of the Presbyterian Church in Western Australia from the state government. The Fremantle City Council, approved plans for Scots Presbyterian Church at a special meeting in March 1890, and on 26 March 1890 the foundation stone was laid by John Forrest. The architect for the building was Talbot Hobbs, the building contractor was Messrs. J. Petrie and Company, with internal decorative painting carried out by E. Bockelmann. The building was completed at a cost of £2,000 and officially opened on 26 November 1890.

All content from Kiddle encyclopedia articles (including the article images and facts) can be freely used under Attribution-ShareAlike license, unless stated otherwise. Cite this article:
Scots Presbyterian Church, Fremantle Facts for Kids. Kiddle Encyclopedia.