Sculpture by the Sea facts for kids 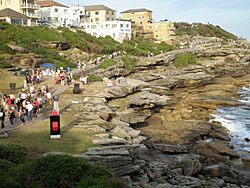 The crowds and sculptures of Sculpture by the Sea 2006 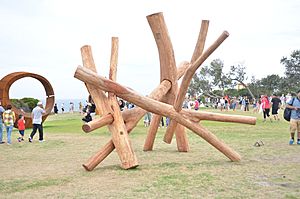 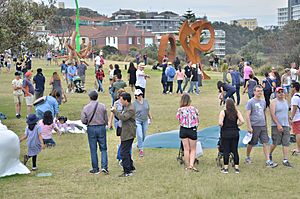 Sculpture By The Sea, Bondi, Sydney 2017

This exhibition is held annually during spring in Australia, from late October to early November for three weeks. Over 100 local, interstate and international artists participate every year. Sculpture by the Sea is incredibly popular and draws considerable crowds. In 2014 Waverley Council estimated that between 450,000 and 500,000 people would visit the sculptures during their exhibition in Sydney.

In 1995, David Handley, founder of Sculpture by the Sea, was living in Prague. He visited an outdoor sculpture park in Klatovy, northern Bohemia. He was inspired to do something similar in Australia. On his return to Sydney in 1996, His friends suggested the Bondi to Tamarama coastal walk as a suitable location. At first, he planned on having paintings as well as sculptures, naming this exhibition "Art by the Sea" but dropped the idea as the weather can be unpredictable on the coast. This is how Sculpture by the Sea came into being.

The first exhibition was put together in a span of 10 weeks and on a shoestring budget. It was held over one day at Bondi and garnered a lot of interest from the media and 20,000 spectators. They received a total of 189 entries from 138 artists and featured 64 of them. The judges included David Cook (Christie's), John MacDonald (Sydney Morning Herald), Terence Measham (Powerhouse Museum), Dr Gene Sherman (Sherman Galleries) and Sculptor Ron Robertson-Swann

The exhibition has only suffered from the weather on the coast. In 1998, rough conditions on the coastline, lead to six sculptures being damaged. Ann Thompson's sculpture worth $40,000 was damaged due to huge waves. In 1999, Duncan Stemler's Give a little whistle was wrecked due to rough weather conditions. The exhibition also suffered from some vandalism, Carol Murphy's $2000 still life The Watcher was stolen only for one part of it to be returned. in 1999, part of Tom Bass's Gender Pieces was pushed into the sea by vandals.

The works are spread right across the cliff from Bronte Beach to Bondi Beach via Tamarama Beach. Every year the coastal walk is transformed into a seaside art gallery. Over 100 sculptures are exhibited in the background of sea and the coastal landscape along the two kilometre coastal walk. Sculpture by the Sea began in 1996 with an exhibition held over one day at Bondi and is now an annual event.

For the first eight years, the main prize was provided by Sydney Water and most of the award-winning works were gifted to Campbelltown Arts Centre. In 2006 and 2007, NAB sponsored the main prize and the works made their way to Orange Regional Gallery. From 2009 – 2012, the Balnaves Foundation sponsored the main prize to the winning sculptor in the exhibition, and the works gifted to the Royal Botanic Gardens. From 2013 – 2015, it was Macquarie Group and the works gifted to Sydney Harbour Federation Trust for placement at George’s Heights. There are many other scholarship and prizes that come out of this exhibition including the Helen Lempriere Scholarship, The Clitheroe Foundation Emerging Sculptor Mentorship Program and Allens People's Choice Award. There is also an encouragement award for younger artists.

THE RECIPIENTS FROM BONDI, 2014

THE RECIPIENTS FROM BONDI, 2013

THE RECIPIENTS FROM BONDI, 2012

THE RECIPIENTS FROM BONDI, 2006

Participants in the 2014 Sculpture by the Sea

This year the exhibition received 500 submissions, from 41 countries and 6 territories around the world, including Australia. Some of the participants include Louis Pratt, Vince Vozzo, Bronwyn Berman, Harrie Fasher, Barbara Licha, Mark McClelland, Sallie Portnoy, Paul Selwood and Margarita Sampson.

In 2005, the first Sculpture by the Sea event was held at Cottesloe beach, Western Australia, overlooking the Indian Ocean. The exhibition showcased sculptures by Western Australia's leading and emerging sculptors, alongside works by invited interstate and international sculptors. This free annual public exhibition attracts approximately 100,000 visitors of all ages.

The recipients from Cottesloe, 2014.

The recipients from Cottesloe, 2013.

The recipients from Cottesloe, 2012.

The recipients from Cottesloe, 2011.

All content from Kiddle encyclopedia articles (including the article images and facts) can be freely used under Attribution-ShareAlike license, unless stated otherwise. Cite this article:
Sculpture by the Sea Facts for Kids. Kiddle Encyclopedia.