Tamarama is a beachside suburb, eastern suburb of Sydney, in the state of New South Wales, Australia. Tamarama is 7 kilometres east of the Sydney central business district, in the local government area of Waverley Council. Tamarama is affectionately nicknamed Glamarama (or Glamourama) by the locals, as it is a beach where wannabe trend setters come to sunbathe and swim or simply try to be seen.

Tamarama has a small ocean beach about 1 kilometre south of Bondi Beach and a couple of hundred metres north of Bronte Beach. The suburb is mostly residential and the beach and adjacent parklands have been popular places for recreation such as swimming, surfing, sunbaking and picnics for more than a century.

Initially known as Dixon Bay by early European settlers, the name was changed to Tamarama in the 1800s. Tamarama is probably a derivation of the Aboriginal name 'Gamma Gamma' (possible meaning 'storm'), which appeared on maps of the coastline in the 1860s by the Military or Naval Authority. In the late 1890s a genteel campaign of civil disobedience was undertaken to open up Sydney beaches to daytime bathing. Inspector of schools and writer George Philip was credited with winning the day in Tamarama.

The Bondi Aquarium at Tamarama, circa 1890

In 1887 Sydney's first coastal amusement park, and one of the earliest in Australia, opened at Tamarama. Named The Bondi Aquarium its greatest attraction was a plunging roller coaster that dived and twisted over the beach. People flocked to the attraction, not only for the rides, but for vaudeville acts and aquarium creatures, including seals and a tiger shark. On the evening of 11 July 1891, fire destroyed the aquarium and pavilion, but it rose from the ashes in September the same year, and continued to entertain Sydney's populace. The last identified concert at the Aquarium was a fund raiser for the Waverley Benevolent Society in July 1906.

Ownership and management changed several times throughout its existence, until the site was finally sold by Mrs Margaret J. Lachaume in 1906 to William Anderson who transformed the amusement park, renaming it Wonderland City. In 1906 Wonderland City opened and replaced the Bondi Aquarium as the latest attraction at Tamarama. Powered by its own steam plant, the amusement park featured an airship suspended over the bay and an elephant named Alice available for rides on the beach. There was also a miniature railway operating on a two-mile track over the cliff tops. Frequent battles with local residents over beach access, charges of animal cruelty and an incident with the airship saw a decline in numbers. After a few years of low crowds and poor revenue Wonderland City closed in 1911. In 1920, the NSW Government bought the area and proclaimed it Tamarama Park. There is still a Wonderland Avenue at Tamarama. The first mayor of Waverley (David Fletcher) lived in Tamarama. 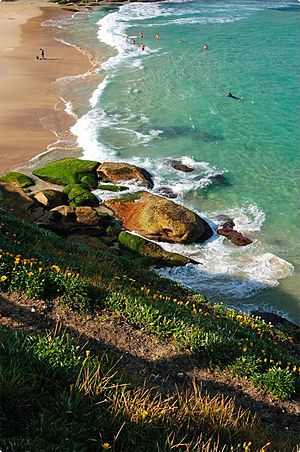 Tamarama Beach is a small beach between two prominent headlands, with a sand filled valley to the back, surrounded by pleasant parkland and picnic areas. Tamarama is an extremely narrow beach and deceptive for its size. Tamarama Beach is often referred to as Glamarama (or Glamourama), owing to the alleged abundance of glamorous people who sunbathe (often topless), on what must be one of the smallest strips of sand in the state. Tamarama Surf Club is located on the northern side, perched up on the headland where it overlooks the entire beach.

Because of its deep water, small size and easterly aspect, Tamarama is dangerous for most swimmers even in a moderate ocean swell. When swimming at Tamarama beach the directions of the surf life savers should not be ignored. Tamarama is considered the most dangerous patrolled beach in New South Wales, with more rescues per thousand bathers than any other of Sydney's beaches, by the Tamarama Surf Life Saving Club.

A small swell can produce rip currents of up to 2 metres a second (which is about the speed of the current 50m men's world record). One or two rip currents are always present, making the entire surf zone virtually all rip. When the swell really rolls in, an offshore rock shelf shapes a stunning 12 to 15 foot wave that draws committed board-riders, photographers and onlookers, taking in the grand spectacle from the cliffs above.

Tamarama is represented in one of the most popular sporting competitions across Australia, the National Rugby League competition, by the local team the Sydney Roosters, officially the Eastern Suburbs District Rugby League Football Club (ESDRLFC). 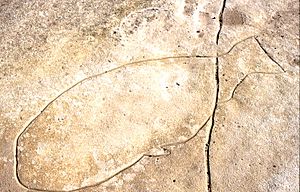 The beach is home to one of the first surf lifesaving clubs in the world, Tamarama Surf Life Saving Club, that was founded in 1906. The Club proudly boasts an enviable record of not having lost a single life to a mishap in the surf in over 100 years of surf life saving patrols. This is a remarkable achievement given that the under tows or "rips" in the surf zone are regarded as being amongst the most dangerous on the east coast of the Australian continent.

Tragically, on July 1, 2014 Matthew Richell, CEO of Hachette Australia sustained a fatal head injury while surfing during a time Tamarama beach is not patrolled by lifeguards and could not be resuscitated by emergency crews.

All content from Kiddle encyclopedia articles (including the article images and facts) can be freely used under Attribution-ShareAlike license, unless stated otherwise. Cite this article:
Tamarama, New South Wales Facts for Kids. Kiddle Encyclopedia.