Wenceslao Moreno (April 17, 1896 – April 20, 1999), better known as Señor Wences, was a Spanish ventriloquist and comedian. His popularity grew with his frequent appearances on CBS-TV's The Ed Sullivan Show in the 1950s and 1960s.

Wenceslao Moreno was born in Peñaranda de Bracamonte, Salamanca, Spain. His father was Antonio Moreno Ros, and his mother was Josefa Centeno Lavera. Both parents were born in the province of Salamanca, his father in Peñaranda de Bracamonte and his mother in Cordovilla. Señor Wences's family on both sides were Roman Catholic. Señor Wences was one of the benefactors of the Convent of Saint Teresa of Avila (1515-1582) in Alba de Tormes, Salamanca, where he had a house. He attended Mass there every Sunday when vacationing during the summer. The street that leads to the convent received the name of Señor Wences while he was alive. Several other places in Salamanca and in Castille have streets named for him.

At age 15, Moreno became a bullfighter, but he had to give up the sport after a serious injury. Doctors advised him to exercise his injured arm, so he learned to juggle and joined a circus act of some friends.

Performing under the stage name "Señor Wences", Moreno was known for his speed, skill, and grace as a ventriloquist. His stable of characters included Johnny, a childlike face drawn on his hand, placed atop an otherwise headless doll, with whom the ventriloquist conversed while switching voices between Johnny's falsetto and his own voice with great speed. He opened his act by drawing Johnny's face on his hand, on stage. He would first place his thumb next to, and in front of, his bent first finger; the first finger would be the upper lip, and the thumb the lower lip. He used lipstick to draw the lips onto the respective fingers and then drew eyes onto the upper part of the first finger, finishing the effect with a tiny long-haired wig on top of his hand. Flexing the thumb would move the "lips." The inspiration for Johnny came from his school days when the teacher punished him for imitating classmates and answering "present" when they were absent. His punishment was to clean the inkwells and he smeared some of the ink on his hand, then clenched his fist to create the face.

Another popular Señor Wences character was the gruff-voiced Pedro, a disembodied head in a box. Wences was forced to suddenly invent the character when his regular, full-sized dummy was destroyed during a 1936 train accident en route to Chicago. Pedro would either "speak" from within the closed box, or speak with moving lips – simply growling, "s'awright" ("it's all right") – when the performer opened the box's front panel with his free hand. A large part of the entertainer's comedy lay in the well-timed, high-speed exchange of words between himself and his creations, and in the difference in their voice pitches.

Part of his act involved throwing his voice while his mouth was otherwise engaged (i.e. smoking or drinking.) Another favorite prop was a telephone, with the ventriloquist playing both sides of a telephone conversation. For the "caller" he simulated a "filtered" voice, as it would sound over a telephone wire. This voice always began a conversation with a shouted "Moreno?" – using Señor Wences' true surname. He would respond "No, Moreno is not here."

He usually built to a big finish that combined ventriloquism with juggling and plate-spinning. As he performed his routines, Pedro and Johnny heckled him. 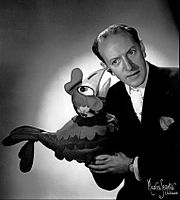 Wences with another of his puppet characters, Cecilia Chicken, in 1962

Although he was an international favorite for decades, his main career was made in the United States, where he arrived in 1934 or 1935. In addition to live performances at nightclubs, he appeared regularly on TV variety shows, including frequent appearances on CBS's The Ed Sullivan Show, where he was a guest 48 times, on Broadway, in Las Vegas casino theaters and in feature films. Much later in his career he was introduced to a new generation of fans on The Muppet Show. His last TV appearance was on The Very Best of the Ed Sullivan Show #2, a retrospective in which the nonagenarian talked about "Suliban" and performed a brief spot of ventriloquism.

He pronounced his name the traditional Castilian way, which in English sounds like "WEN-thess". After Sullivan would announce him saying his name as "Señor Wen-sess", the ventriloquist would subtly correct Sullivan's pronunciation by announcing himself to the audience: "Hello, I am Señor Wen-thess".

In the early 1980s, a Tri-State Honda dealer's commercial featured Señor Wences with Johnny. Pedro's "s'awright" was a voice from the elaborate glovebox. Señor Wences would point out all of the car's features to which Johnny would reply, "Ees Standard", "Stan-dard!", and "Nice!" This may have been Wences final commercial appearance. It was shot in Puerto Rico because its star declined to travel to New York. Tony Belmont, at the time the President of Alan Freed Productions, was his agent and manager throughout the 1980's, and he secured Wences a spot performing at Ruth Eckerd Hall, among many others. In 1986, he made a guest appearance on The Garry Shandling Show.

In 2009 Señor Wences was featured in the ventriloquist comedy documentary I'm No Dummy, directed by Bryan W. Simon.

One of Wences's trademark bits of shtick (referenced several times below) involves his dialogue with a low voice emanating from inside a box. At the opening of the dialogue he would shout, "Hello in the box!" At the conclusion of the dialogue, he would open the lid of the box and ask "S'aright?" ("It's all right?") and the box voice would answer "S'ariiight!" after which Señor Wences would immediately shut the box again.

Another involved explaining to his hand puppet Johnny that something was easy (or difficult) to do, to which the puppet would reply the contrary, such as, "Easy for you, for me ees very deefeecult!" in his Spanish accent.

These catchphrases were incorporated into a record Wences released in 1959 by Joy Records (New York), featuring the songs "S-All Right? S-All Right" and "Deefeecult For You – Easy For Me".

Despite his retirement by age 100, Wences' famous puppets Johnny and Pedro "continued working". Ventriloquists Jay Johnson, Rickie Layne and Michele LaFong performed at Wences' 100th birthday celebration at the New York Friars' Club (where he was made a lifetime member), and he was so impressed with LaFong that he befriended her. "Wences' Puppets: Gotta Hand It To 'Em", New York Daily News, 7 January 1998. Las Vegas headliner Michele LaFong continues to perform Wences' routines after his death, using some of his original characters. Another famous ventriloquist who was present at Wences' birthday party, and who met him there for the first time was Paul Winchell.

Wences died on April 20, 1999, three days after his 103rd birthday. He had been residing in New York City's Upper West Side on 54th Street, just around the corner from the Ed Sullivan Theater. That section of 54th Street has been named Señor Wences Way. His portrait can be seen at the Players Club in New York.

All content from Kiddle encyclopedia articles (including the article images and facts) can be freely used under Attribution-ShareAlike license, unless stated otherwise. Cite this article:
Señor Wences Facts for Kids. Kiddle Encyclopedia.