Seacliff Lunatic Asylum (often Seacliff Asylum, later Seacliff Mental Hospital) was a psychiatric hospital in Seacliff, New Zealand. When built in the late 19th century, it was the largest building in the country, noted for its scale and extravagant architecture. It became infamous for construction faults resulting in partial collapse, as well as a 1942 fire which destroyed a wooden outbuilding, claiming 37 lives (39 in other sources), because the victims were trapped in a locked ward.

The asylum was less than 20 miles north of Dunedin and close to the county centre of Palmerston, in an isolated coastal spot within a forested reserve. The site is now divided between the Truby King Recreation Reserve, where most of the old buildings have been demolished and most of the area remains dense woodland, and privately owned land where several of the smaller hospital buildings have been renovated completely.

Seacliff is claimed to be haunted by former patients of what was the country's biggest building at the time. 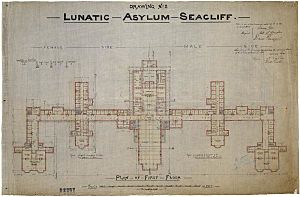 New Zealand's largest building was an exercise in Gothic Revival architecture, but its facades belied the utilitarianism of its repetitious interior.

The need for a new asylum in the Dunedin area was created by the Otago gold rush expansion of the city, and triggered by the inadequacy of the Littlebourne Mental Asylum. In 1875, the Provincial Council decided to build a new structure on "a reserve of fine land at Brinn's Point, north of Port Chalmers". Initial work was begun in the "dense trackless forest" in 1878, though the Director of the Geological Survey criticised the site location, because he felt that the hillside was unstable.

Seacliff Asylum was one of the most important works of Robert Lawson, a New Zealand architect of the 19th century. Known for designing in a range of styles, including the Gothic Revival, he started work on the new asylum in 1874, and was involved with it until the completion of the main block in 1884. At that time, it was New Zealand's largest building, and was to house 500 patients and 50 staff. It had cost £78,000 to construct.

Architecturally, Lawson's work on the asylum was very exuberant, making some of his previous designs look comparatively tame. The asylum had turrets on corbels projecting from nearly every corner, with the gabled roof line dominated by a large tower complete with further turrets and a spire. The building contained four and a half million bricks made of local clay on the site and was 225 metres long by 67 metres wide. The great central tower of 50 m height, an essential element of many revivalist designs, was also proposed to double as an observation tower if inmates should try to escape.

It was later said of the building and its (forlorn) location that: "The Victorians might not have wanted their lunatics living with them, but they liked to house them grandly.".

The asylum was progressively added to in later years as it was transformed to function as a working farm, though most of the newer buildings were much simpler wooden structures. Staff lived in separate accommodation close to the wards, and they were able to socialise in nearby Dunedin. 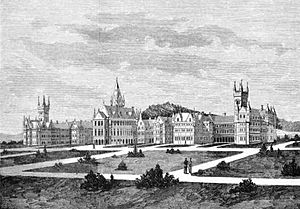 The hospital in 1884, with the main buildings completed.

Structural problems began to manifest themselves even before the first building was completed, and in 1887, only three years after the opening of the main block, a major landslide occurred - predicted as a risk by the surveyors - and affected a temporary building.

Problems with the design's stability could no longer be ignored even at the time, and in 1888 an enquiry into the collapse was set up. In February of that year, realising that he could be in legal trouble, Lawson applied to the enquiry to be allowed counsel to defend him. During the enquiry all involved in the construction - including the contractor, the head of the Public Works Department, the projects clerk of works and Lawson himself - gave evidence to support their competence. The enquiry decided that it was the architect who carried the ultimate responsibility, and Lawson was found both 'negligent and incompetent'. This may be considered an unreasonable finding as the nature of the site's underlying bentonite clays was beyond contemporary knowledge of soil mechanics, with Lawson singled out to bear the blame (but this disregards the fact that the site's problems had been pointed out by the surveyors). As New Zealand was at this time suffering an economic recession, Lawson found himself virtually unemployable.

The main block survived until 1959, when it was demolished because of further earth movement. 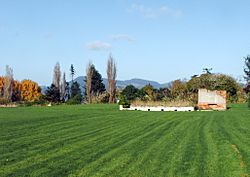 Little remains on the Truby King Reserve of the hospital other than a few building foundations.

Primarily as a result of worsening ground conditions which progressively affected many of the buildings, the hospital functions of Seacliff were progressively moved to Cherry Farm, closing in 1973. The site was subdivided, with the land surrounding the original building site later becoming Truby King Recreation Reserve, having passed into the ownership of Dunedin City in 1991. Around 80% of the reserve is densely wooded, with the area commonly called the 'Enchanted Forest'. The last remaining building in the reserve was demolished due to structural faults in 1992, after an initiative to establish a transport museum had failed.

The remaining area of hospital buildings outside the Reserve is privately owned. In the summer of 2006-2007, regular guided tours of the hospital grounds were operated in conjunction with the Taieri Gorge Railway's Seasider tourist train service.

All content from Kiddle encyclopedia articles (including the article images and facts) can be freely used under Attribution-ShareAlike license, unless stated otherwise. Cite this article:
Seacliff Lunatic Asylum Facts for Kids. Kiddle Encyclopedia.