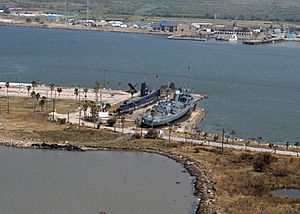 Seawolf park is unique in that it has a submarine, the remains of a merchant ship, and a destroyer escort designed to conduct antisubmarine warfare—the hunter, hunted, and the protector—all in one museum area. It is the home of two preserved U.S. Navy ships, the Gato-class submarine USS Cavalla (SS-244) and the Edsall-class destroyer escort USS Stewart (DE-238), and the remains of the World War I tanker S.S. Selma, the largest concrete ship constructed, can be seen northwest of the park's fishing pier at 29°20′40″N 94°47′10″W﻿ / ﻿29.34444°N 94.78611°W﻿ / 29.34444; -94.78611 . Also preserved at the park is the conning tower of the Balao-class submarine USS Carp (SS-338) and the sail of the Sturgeon-class nuclear attack submarine USS Tautog (SSN-639).

At the ladder leading up to the deck of USS Stewart are two bronze, fifty-six inch ship propellers. Each weighs over a ton and was powered by 2 Diesel Engines. That means the Stewart had up to 6,000 horsepower available to drive it up to 21 knots (or about 24 mph). These have been removed from the ship so they can be seen by visitors.

Behind the propellers are 2 x 3 inch, 50 caliber memorial guns donated from the USS Texas. The Stewart had three more of these guns on board.

The park has a picnic area, and fishing is allowed on the pier for a small fee. There is also pedestrian access to the shoreline on either side of the park where anglers can fish for free. Fish that can be caught in the park area include sand seatrout, speckled trout, gafftopsail catfish, drum, and flounder, among others.

All content from Kiddle encyclopedia articles (including the article images and facts) can be freely used under Attribution-ShareAlike license, unless stated otherwise. Cite this article:
Seawolf Park Facts for Kids. Kiddle Encyclopedia.