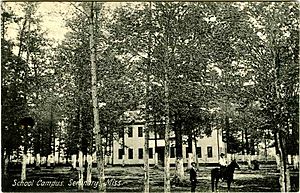 Historic photo of a school campus in Seminary

Seminary is a town in Covington County, Mississippi, United States. The population was 314 at the 2010 census.

Okatoma Creek, part of the Pascagoula River watershed, runs through Seminary, and is popular for canoeing and kayaking.

The area was sparsely populated prior to the Civil War. In the same location as where the town sits today, Covington County resident and Presbyterian pastor A. R. Graves opened Zion Seminary, a boarding school for men and women, in 1845. The seminary offered courses in law, medicine, and religious studies. At its largest, the seminary had more than 500 students. Dormitories and cottages housed them. During the Civil War, all but one building of Zion Seminary burned. Local legend has it that the buildings were burned by Union sympathizers, but it is not clear if this is true. The seminary was in operation until it burned again in 1890. The site of the Zion Seminary was then used to build Seminary Attendance Center; the school still sits today upon this location in the center of town.

In the late 1800s, across the Piney Woods region of South Mississippi, lumber companies cut the virgin timber from these areas. Towns began springing up along railroads, then the main means of transportation. The population of Seminary began to boom in the late 1800s, but when the timber had been cut, the boom continued on to the next community. In the late 1800s, the residents petitioned the state of Mississippi to incorporate into a municipality, and the charter was granted in 1899. The newborn town's citizens chose the name "Seminary" to keep alive the memory of the Zion Seminary.

Seminary is still a very small town, with only a handful of businesses, including Ramey's, Dollar General, two banks, two doctor's offices, a pharmacy, an art studio, a hardware store, a barber shop, and one restaurant, The Dixie Grill. The rural area around Seminary, however, is growing significantly. The population of the area, including the town of Seminary and the rural, unincorporated communities of Okahay, Eminence, Sanford, Lux, Foxtrot, Ora, Lone Star, and Richmond, grew by more than 10% between the 2000 and 2010 censuses.

This significant growth is likely a result of a good school system and the area's proximity to Hattiesburg, which lies 10–20 minutes south of the Seminary area. New businesses are springing up on Highway 49 just outside the town's corporate limits.

There were 141 households out of which 31.2% had children under the age of 18 living with them, 56.0% were married couples living together, 12.1% had a female householder with no husband present, and 31.2% were non-families. 29.8% of all households were made up of individuals and 17.7% had someone living alone who was 65 years of age or older. The average household size was 2.38 and the average family size was 2.96.

All content from Kiddle encyclopedia articles (including the article images and facts) can be freely used under Attribution-ShareAlike license, unless stated otherwise. Cite this article:
Seminary, Mississippi Facts for Kids. Kiddle Encyclopedia.