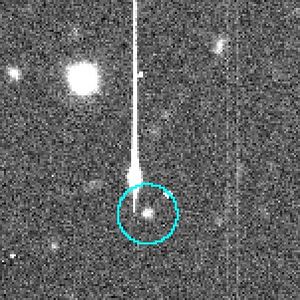 Confirmed as Uranus XIX it is named after the god worshipped by Caliban and Sycorax in William Shakespeare's play The Tempest.

The orbital parameters suggest that it may belong, together with Sycorax and Prospero to the same dynamic cluster, suggesting common origin. However, this suggestion does not appear to be supported by the observed colours. The moon appears grey in the visible light, similar to Prospero but different from Sycorax (which is light red).

All content from Kiddle encyclopedia articles (including the article images and facts) can be freely used under Attribution-ShareAlike license, unless stated otherwise. Cite this article:
Setebos (moon) Facts for Kids. Kiddle Encyclopedia.