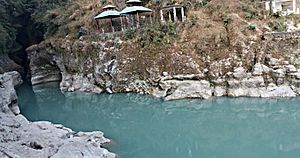 The Seti Gandaki River (Nepali:सेती गण्डकी नदि) is a river at western part of Nepal. It is a tributary of Trishuli River. It is one of the holy river in Hindu religion. It is worshipped as a form of Vishnu. It flows south and south-east past Pokhara and Damauli to join the Trishuli River near Devghat.

In May 2012 a flood on the river killed more than 60 people north of Pokhara. It also changed the course of the river.

All content from Kiddle encyclopedia articles (including the article images and facts) can be freely used under Attribution-ShareAlike license, unless stated otherwise. Cite this article:
Seti Gandaki River Facts for Kids. Kiddle Encyclopedia.