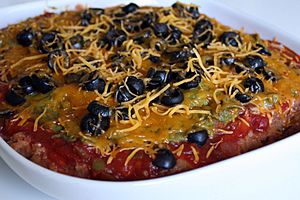 A seven-layer dip is an American appetizer based on ingredients typical of Tex-Mex cuisine. The first widely published recipe (1981, Family Circle magazine) called it Tex-Mex Dip without reference to any layers. The dish was popular in Texas for some time before the recipe first appeared in print.

The dish is often chilled when not served immediately. Originally served with corn chips, Tex-Mex Dip is now served most often with tortilla chips.

All content from Kiddle encyclopedia articles (including the article images and facts) can be freely used under Attribution-ShareAlike license, unless stated otherwise. Cite this article:
Seven-layer dip Facts for Kids. Kiddle Encyclopedia.