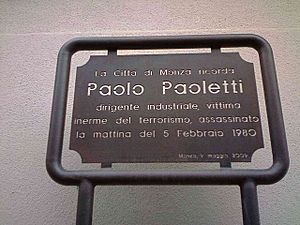 The Seveso disaster was a chemical accident on 10 July 1976, at the small Italian town of Meda, 20 km from Milan in Lombardy. There was an explosion at a chemical factory which released a lot of the toxic poison dioxin, TCDD, into the air. The cloud of poison gas covered an area 6 km long and 1 km wide. It was named after the municipality of Seveso. It resulted in the highest known exposure to 2,3,7,8-tetrachlorodibenzo-p-dioxin (TCDD) in residential populations There were many studies and new regulations after the accident. The European Union directive covering the protection against such accidents is known as Seveso-II-directive today.

The company where the accident happened was called Icmesa. It was owned by Givaudan, who is owned by Roche. Icmesa produced Trichlorophenol, which is used to produce the disinfectant Hexachlorophene. The company was located in four communes; one of them Seveso.

None of the 20,000 people who lived in Seveso died, but the poison killed 3,000 farm animals and pets. Another 70,000 animals had to be killed to stop the dioxin from getting into the food chain.

Thirty years after the accident, scientists reported that babies born in the area affected by the dioxin were six times more likely to have thyroid problems. The affected children are being studied to see if this has stopped them growing properly, or having problems with intellectual development (IQ).

All content from Kiddle encyclopedia articles (including the article images and facts) can be freely used under Attribution-ShareAlike license, unless stated otherwise. Cite this article:
Seveso disaster Facts for Kids. Kiddle Encyclopedia.