Kids Encyclopedia Facts
This page is about the urban park. For neighborhood of the same name, see Seward Park, Seattle.

Seward Park is a municipal park in Seattle, Washington, United States. Located in the city neighborhood of the same name, it covers 300 acres (120 ha; 0.47 sq mi). The park occupies all of Bailey Peninsula, a forested peninsula that juts into Lake Washington. It contains one of the last surviving tracts of old-growth forest within the city of Seattle. The park is named for U.S. Secretary of State William Seward.

The park is accessible from the north by Lake Washington Boulevard S, from the south by Seward Park Avenue S., and from the west by S Orcas Street. The main parking lot and a tennis court are located in the southwest corner. The most commonly used trail is a car-free loop around the park. It is flat and 2.4 mi (3.9 km) in length. The perimeter trail was repaved in 2007. Other trails run through the interior, including a few car-accessible roads that lead to amenities including an amphitheater and picnic area. Seward Park features numerous small beaches, the largest one on its southwest side, as well as a playground and an arts center.

The 300 acres (120 ha) of Seward Park have roughly 120 acres (49 ha) of surviving old growth forest, providing a glimpse of what some of the lake shore looked like before the city of Seattle was founded. With trees older than 250 years and many less than 200, the Seward Park forest is relatively young (the forests of Seattle before the city was fully mature were usually 1,000–2,000 years old). 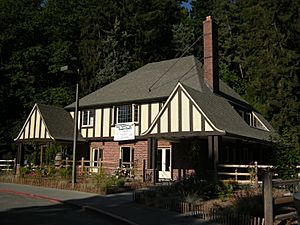 The area has been inhabited since the end of the last glacial period (c. 8000 BCE—10,000 years ago). The People of the Large Lake (Xacuabš or hah-chu-AHBSH, today the Duwamish tribe) had resource sites; villages were nearby. The Duwamish called Bailey Peninsula "Noses" (Lushootseed: squbáqst) for rocky points, or "noses", at the north and south ends evident before the completion of the Lake Washington Ship Canal in 1916 lowered the level of Lake Washington. The marshy isthmus was called cka’lapsEb, Lushootseed for “neck”.

The purchase of the park was suggested as early as 1892, but was sidelined due to its distance from what was then the city. However, the Olmsted Brothers assimilated it into its plan for Seattle parks, and the city of Seattle bought Bailey Peninsula in 1911 for $322,000, and named the park after William H. Seward, former United States Secretary of State, who was known for negotiating the Alaska Purchase

At the entrance to the park, in a wooded island filled with flowers between the circular entrance and exit road, there is a little-known monument: a taiko-gata stone lantern, a gift of friendship from the City of Yokohama, Japan, which was given to the city in 1931 in gratitude to Seattle's assistance to Yokohama after the 1923 Great Kantō earthquake.

From 1935 to the mid 1980s, a Japanese style wooden torii stood near the entrance to Seward Park until it was removed due to decay. A replacement made with stone columns and timber cross beams was completed by early 2021.

Since at least July 2004, the park has become a home to wild rabbits and a growing colony of feral Peruvian conures (parrots, either the Chapman's mitred or the scarlet-fronted), who were released into the wild by their owners (or some escaped). They fly between Seward Park and Maple Leaf in northeast Seattle. The park is also home to two nesting pairs of bald eagles, who can frequently be seen flying over Lake Washington and diving to the water's surface to catch fish and ducks.

Renovation on the Tudor-style house at the entrance to Seward Park—originally the Seward Park Inn, a Seattle city landmark—was completed early in 2008. It is now home to the Seward Park Environmental & Audubon Center. Programs at the Center and in the park include school, youth, community, arts in the environment, and special events. The Center also includes exhibits, an extensive library, a laboratory, and a small gift shop.

The first Seward Park experience is the beach on Andrews' Bay. Flanked by a broad lawn and with full facilities, it is one of Seattle's several lakeshore beaches.

On the other side of this beach is the second experience: a playground, tennis courts, and several large parking lots. This is the most social part of Seward Park, and the lot often features neighboring residents sometimes throw impromptu parties in this area of the park.

The third experience is in the "upper lots," which provide parking for a large picnic area and an outdoor amphitheatre. Civic events are often held in the amphitheatre, which has beautiful views of the old-growth forest, and it has become a well-known spot to celebrate that is the diversity of both Seattle and its South End. These parking lots can also host impromptu parties.

The fifth experience is the paved perimeter of the park, which is a favorite place for neighbors and visitors alike to walk, run, bike, and blade. The perimeter reminds its user of the vast metropolis that is Seattle, since it affords to the south of the park (1) a view of Mount Rainier dominating South Lake Washington, as well as Boeing plants; to the east of the park (2) fine view of Mercer Island; north of the park (3) the downtown skyscrapers jutting out over the Mount Baker/Leschi ridge, (4) the busy hum of I-90, and (5), the Jefferson Park golf course, where famous local golfer Fred Couples got his start as a boy growing up on Beacon Hill; and finally, to the west of the park, the many fine homes climbing the "ridge with no name" that flanks the entire western side of the park (the southernmost peak of this ridge is sometimes referred to as "Graham Hill," and has a school named after it, but the name has never really taken, since the ridge extends well beyond the natural boundaries of Graham Hill).

All content from Kiddle encyclopedia articles (including the article images and facts) can be freely used under Attribution-ShareAlike license, unless stated otherwise. Cite this article:
Seward Park (Seattle) Facts for Kids. Kiddle Encyclopedia.