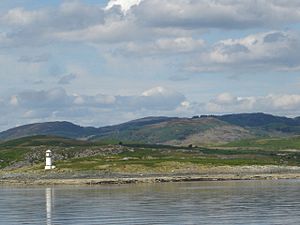 Sgat Mòr with Cowal behind.

Sgat Mòr and Sgat Beag ( English: The Skate Islands or, less commonly, Skate Island and Wee Skate Island) are two small islands that lie at the mouth of Loch Fyne by the shore of the Cowal peninsula on the west coast of Scotland.

Sgat Mòr lies at directly south of Eilean Aoidhe and rises just 11 metres (36 ft) above sea level. Sgat Beag is a similar but slightly smaller island that lies approximately 1 kilometre to the east, across the mouth of Asgog Bay.

The islands appear to have been named after the Skate fish however there is a Skate Point and Skate Bay on nearby Great Cumbrae so it is not impossible that skate is a local toponym with a different derivation.

The channel between Sgat Mòr and the Cowal shoreline at Eilean Aoidhe is navigable and local sailing regattas, paddle steamer Waverley and MV Balmoral regularly pass inside this narrow channel. The waters to the south of the islands are the deepest in the Clyde area.

A beacon resembling a small lighthouse is situated on the southwestern shore of Sgat Mòr.

Sgat Mòr was traditionally a habitat for the Common eider however predation from invasive mink caused breeding to collapse in the mid 2000s.

Sgat Mòr and Sgat Beag have historically presented a considerable hazard to shipping and in excess of nine ships have foundered on or near the islands.

All content from Kiddle encyclopedia articles (including the article images and facts) can be freely used under Attribution-ShareAlike license, unless stated otherwise. Cite this article:
Sgat Mòr and Sgat Beag Facts for Kids. Kiddle Encyclopedia.