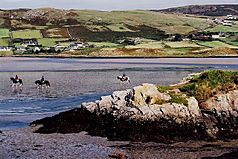 View of Sheephaven Bay from Dunfanaghy. Horn Head is beyond. 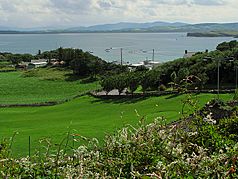 Looking down onto Sheephaven Bay near Marble Hill 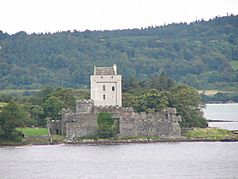 Sheephaven Bay (Irish: Cuan na gCaorach) is a broad, shallow inlet on the north coast of County Donegal in Ulster, Ireland. Bounded by the peninsulae of Rosguill, to the east and Horn Head (Irish: Corrán Binne) to the west, the bay is relatively protected from the full force of the Atlantic Ocean, and has supported a vibrant herring fleet.

The Irish name Cuan na gCaorach, "Haven of the Sheep", is a neologism, from a mistranslation of Cuan na gCurrach, "The Bay (or Haven) of the Currachs (boats)". When the name was translated to English, the word "ship" (used by monoglot locals for 'boat') was misheard as "sheep".

Sheephaven Bay is home to Doe Castle, located near Creeslough, which was built in the early 16th century. The castle, which still stands, was a stronghold for the Clan Sweeney (Clan Suibhne) for 200 years.

Settlements around the bay

All content from Kiddle encyclopedia articles (including the article images and facts) can be freely used under Attribution-ShareAlike license, unless stated otherwise. Cite this article:
Sheephaven Bay Facts for Kids. Kiddle Encyclopedia.