Sheridan Park is a municipal park in the city of Cudahy, Wisconsin. Situated on the shore of Lake Michigan, the park has trees, shrubs, and other plants native to this region of Wisconsin. 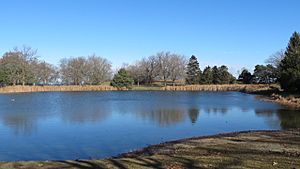 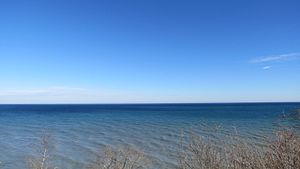 View of Lake Michigan from a bluff at Sheridan Park

The mayor of Cudahy, Wisconsin in 1913, Christ Woehsner, believed that a public park should be built on the shore of Lake Michigan. In a letter, he expressed his deep appreciation for the beauty that the area offered. The letter led to the purchase of land near the shore of Lake Michigan from the landowner, Patrick Cudahy. In 1914, the Public Park of Cudahy became an official park. In 1920, the name was changed to Sheridan Park in memory of Major-General Philip Henry Sheridan.

Sheridan Park contains distinct natural areas. There are open fields, wooded areas, bluffs, beaches, and a pond. The area along the bluff contains plant species native to this part of Wisconsin.

All content from Kiddle encyclopedia articles (including the article images and facts) can be freely used under Attribution-ShareAlike license, unless stated otherwise. Cite this article:
Sheridan Park Facts for Kids. Kiddle Encyclopedia.