Ship Island Light was a lighthouse in Mississippi near Gulfport.

The first tower at this site was constructed in 1853; though appropriations were made starting in 1848; disputes over land ownership delayed acquisition of the land. This tower was built of brick and was initially equipped with a multiple lamp and reflector system; three years later, it was upgraded to a fourth-order Fresnel lens. 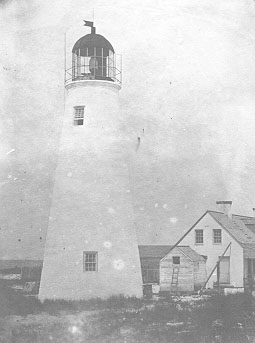 undated photograph of the 1853 tower (USCG)

In January 1861 at the beginning of the Civil War confederate forces seized the island, including the incomplete fortifications and the lighthouse. When they abandoned the fort in September, they removed the lighthouse lens and set the interior on fire. Union forces occupied the island shortly thereafter and restored it to operation in November 1862, using a captured lens and lantern. The light was blacked out to the north to prevent its use by blockade runners approaching from the mainland.

By this time the tower had begun to lean conspicuously, and in 1886 it was condemned as unsafe, and a new tower was erected about 300 feet (91 m) away. This tower was constructed entirely of wood and was originally an open framework, though it was soon sheathed in siding. Wood frame keeper's houses were constructed to either side of it. The characteristic of the light had been changed from fixed white to fixed red in 1880. During this era the light was tended by one Dan McColl, who had lost a leg in a railroad accident. The old tower collapsed in 1901. Three years previous, a set of range lights had been erected to mark one section of the channel out of Gulfport, Mississippi; it was considered that the labor of climbing three towers was too much too expect of McColl, and he was transferred to Cat Island Light, a nearby screw-pile lighthouse, where he served until he died in 1904. The rear light of the range stood on a short open wood tower, a short distance from the main tower.

Automation came to the light in 1950. By this time the character of the island had changed considerably. In the 1800s and early 1900s the island served as a port of entry due to the deep water harbor behind it; besides the fort, there was a quarantine station, and the island was at times a popular destination for tourists. The importance of these facilities declined, and in 1934 most facilities on the island were deeded through act of Congress to an American Legion post; the lighthouse, however, was excluded at the Coast Guard's insistence. In 1959, however, the Coast Guard granted a special-use permit to a Philip M. Duvic "for private use and general recreational purposes" for the lighthouse. In the following few years Duvic renovated the lighthouse and converted the interior into a sort of cabin. In 1964 the light was deactivated, and the following year it was put up for sale, and Duvic (the sole bidder) was able to purchase it for $2560. A stipulation of the sale was that the structure had to be removed within ninety days of the sale; however, this stipulation was never enforced and the tower remained in place. 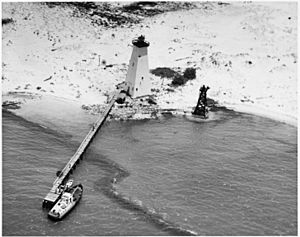 The tower would stand until 1972, when it was burned down accidentally from sparks from a campers' fire. However, it was by that time abandoned, as damage from Hurricane Camille had put it beyond repair. Duvic had also lost his main home to the storm. The old range light was replaced in 1971 by a much taller steel skeletal tower which still stands.

In 2000 a replica of the wooden tower was erected on the foundation of its predecessor. This work was sponsored by the Friends of Gulf Islands National Seashore; the actual construction was performed by Seabees, using beams provided by the forest service. The beacon was relit and appeared on charts as a private aid to navigation. It 2005, however, Hurricane Katrina destroyed it, leaving no trace but the foundation. The old Fresnel lens, which had been removed long before to the Maritime and Seafood Industry Museum in Biloxi, was also badly damaged at the time, though there are plans to repair it. The skeletal range light stands as the only light on the island.

All content from Kiddle encyclopedia articles (including the article images and facts) can be freely used under Attribution-ShareAlike license, unless stated otherwise. Cite this article:
Ship Island Light Facts for Kids. Kiddle Encyclopedia.