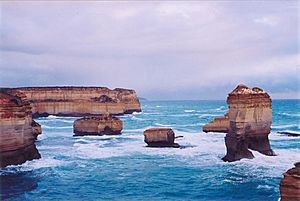 The Shipwreck Coast of Victoria, Australia stretches from Cape Otway to Port Fairy, a distance of approximately 130 km. This coastline is accessible via the Great Ocean Road, and is home to the limestone formations called The Twelve Apostles.

Explorer Matthew Flinders said of the Shipwreck Coast, "I have seldom seen a more fearful section of coastline."

There are approximately 638 known shipwrecks along Victoria’s coast, although only around 240 of them have been discovered. The Historic Shipwreck Trail along the Shipwreck Coast and the Discovery Coast shows some of the sites where gales, human error and, in some cases, foul play caused these vessels to be wrecked.

Ships wrecked on the Shipwreck Coast include:

Over 50 shipwrecks are commemorated in a Historic Shipwreck Trail beginning at Port Fairy.

All content from Kiddle encyclopedia articles (including the article images and facts) can be freely used under Attribution-ShareAlike license, unless stated otherwise. Cite this article:
Shipwreck Coast Facts for Kids. Kiddle Encyclopedia.