Short Pump Town Center is an open-air shopping mall located in the Short Pump census-designated place (CDP) of unincorporated Henrico County, Virginia on West Broad Street (U.S. Route 250), approximately 1 mile (1.6 km) west of I-64, exit 178A/B. This area of Henrico County is called The West End and is northwest of Richmond. Short Pump Town Center is home to many restaurants and stores including Macy's and Dillard's.

Short Pump Town Center is a two-level, open-air retail center composed of upscale stores. It was opened on September 4, 2003 and has over 140 stores. The center is owned and operated by Queensland Investment Corporation.

In 2004, Circuit City opened outside the mall. After Circuit City went out of business in 2009, it was replaced by hhgregg. Hhgregg closed for good in 2017.

Anchor stores are Dick's Sporting Goods, Dillard's, and Macy's (originally Hecht's until 2006). The mall's other anchor, Nordstrom, closed in mid-2020. The mall was also intended to have a Lord & Taylor as an additional anchor, until they pulled out from that plan.

On May 7, 2020, Nordstrom announced that it would be closing their location at Short Pump permanently as part of a plan to close 16 locations nationwide.

Surrounding the mall, there are several strip malls, other stores, and restaurants within walking or short driving distance. These are on the Town Center property, however they are not a part of the mall itself. They are listed on the mall's store directory despite not being attached to the mall itself.

Following a disagreement with Taubman Centers on a possible mall development project, Stony Point Fashion Park was developed as a direct competitor and opened in 2003 in the same month as Short Pump Town Center. It is smaller but of the same upscale style as Short Pump Town Center. The mall was opened on September 17, 2003. Both malls were declared a huge success and have drawn major national chains and retailers from around the world. 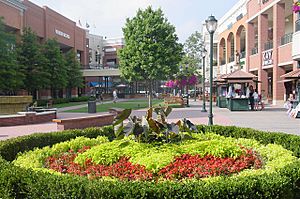 The 'Short Pump Express' is a trackless train that connects points in Short Pump Town Center. Although marketed at children, the service is open to people of all ages. Service began in 2007. The trains are black or silver, with passengers carts either being dark green, red, or navy blue. The fare for the train is $3.00. The service also allows passengers to purchase 10-ride passes.

All content from Kiddle encyclopedia articles (including the article images and facts) can be freely used under Attribution-ShareAlike license, unless stated otherwise. Cite this article:
Short Pump Town Center Facts for Kids. Kiddle Encyclopedia.