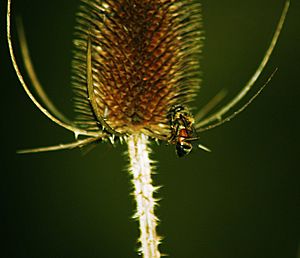 A bee caught and impaled by a shrike

Shrikes are passerine birds of the family Laniidae. The family has 31 species in three genera. The family name, Lanius, is derived from the Latin word for "butcher". Some shrikes were also known as "butcher birds" because of their feeding habits. This is because shrike sometimes sticks its prey on a thorn, as on a meat hook. This makes it easier for them to feed on it.

Most shrike species live in Eurasia and Africa, with just two breeding in North America. There are no members of this family in South America or Australia, although one species reaches New Guinea.

The shrikes vary in the size of their ranges. Some species like the Great Grey Shrike range across the northern hemisphere, whereas Newton's Fiscal is restricted to the island of São Tomé.

All content from Kiddle encyclopedia articles (including the article images and facts) can be freely used under Attribution-ShareAlike license, unless stated otherwise. Cite this article:
Shrike Facts for Kids. Kiddle Encyclopedia.