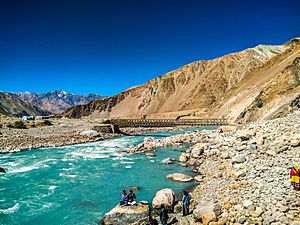 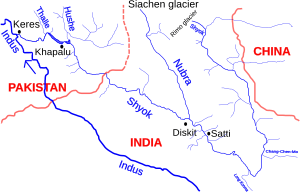 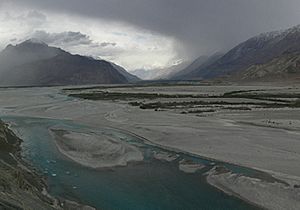 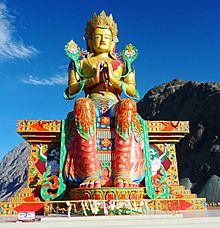 35 metre statue of Maitreya Buddha facing down the Shyok River towards Pakistan.

The alignment of the Shyok river is very unusual, originating from the Rimo glacier it flows in a SE direction and at joining the Pangong range it takes a NW turn and flows parallel to its previous path. The Shyok flowing in a wide valley suddenly enters a narrow gorge after Chalunka and then joins the Indus at Skardu (Pakistan). The Nubra river originating from the Siachen glacier also behaves like the Shyok, before Tirit the SE flowing river takes a NW turn on meeting the river Shyok. The similarity in the courses of these two important rivers probably indicates a series of palaeo fault lines trending NW-SE in delimiting the upper courses of the rivers. The importance of the Indus River and the Shyok rivers is in the deposition of a huge thickness of Quaternary sediments a treasure trove for geology researchers.

All content from Kiddle encyclopedia articles (including the article images and facts) can be freely used under Attribution-ShareAlike license, unless stated otherwise. Cite this article:
Shyok River Facts for Kids. Kiddle Encyclopedia.