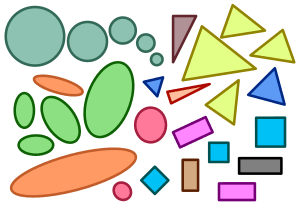 Figures shown in the same color are similar

Similarity is an idea in geometry. It means that two polygons, line segments, or other figures can become the same via resizing. Similar objects do not need to have the same size. Two shapes are similar if their angles have the same measure and their sides are proportional. Two circles, squares, or line segments are always similar. If figure

is similar to figure

When it comes to similarity, triangles are special. This is because triangles can be similar if only their angles are equal, or only their sides are proportional. All other polygons must meet both of the conditions.

All content from Kiddle encyclopedia articles (including the article images and facts) can be freely used under Attribution-ShareAlike license, unless stated otherwise. Cite this article:
Similarity (geometry) Facts for Kids. Kiddle Encyclopedia.