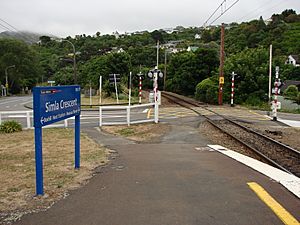 Electric multiple unit trains are operated by Tranz Metro under the Metlink brand through this station in both directions to Johnsonville (to the north) and Wellington (to the south).

As part of the upgrade of the section of the old Wellington and Manawatu Railway between Wellington and Johnsonville, two new stations were constructed, Simla Crescent and Awarua Street. The newly electrified Johnsonville Branch officially opened with a ceremony on 2 July 1938, and for all trains from Monday 4 July, although the two new stations had been used by some steam trains from 10 January 1938.

Trains run in both directions through this station, departing at half-hourly intervals, supplemented by additional services (giving a 13-minute interval between trains) at peak times on week days.

The nearest bus routes are #25 and #26 at the corner of Cockayne Road and Clutha Avenue.

There is a bus stop (No 5435) with shelter in Khandallah Road behind the station, for buses replacing trains only.

This station has a single side platform and passenger shelter. Pedestrian access is from Khandallah Road or Simla Crescent. There is no dedicated station car park, although there are several car parks in the cul-de-sac off Simla Crescent and below the line on the opposite side to the station.

All content from Kiddle encyclopedia articles (including the article images and facts) can be freely used under Attribution-ShareAlike license, unless stated otherwise. Cite this article:
Simla Crescent railway station Facts for Kids. Kiddle Encyclopedia.